Adventures in Southern Seas A Tale of the Sixteenth Century 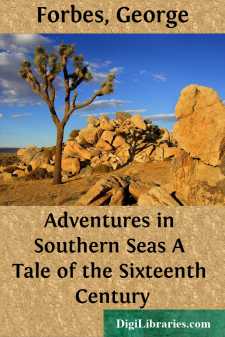 CHAPTER I I FALL INTO CAPTIVITY

Let those who read this narrative doubt not its veracity. There be much in Nature that we wot not of, and many strange countries to explore. The monsters who roamed the earth in ancient times, as their fossil bones attest, are still to be seen in those regions hitherto unvisited by white men, and in the fathomless depths of uncharted seas leviathans find a home.

Peter Ecoores Van Bu was born upon the island of Urk, in the Zuider Zee, in the year 1596, and was brought up a fisher-lad until the coming to the island of a priest, to whom my parents, ambitious for my advancement, entrusted my education in the arts of reading and writing, accomplishments in little vogue at this time. Hence it comes that I am able to set down here a record of perils and adventures by sea and land which may prove entertaining reading to those who have never travelled beyond the limits of their own countries.

My parents, who had stinted themselves to provide my education, placed me when I was eighteen years old in a merchant's office at Amsterdam, where I became acquainted with Dirk Hartog, a famous navigator, who, a year later, invited me to become his secretary and engraver of charts on board the ship "Endraght", being then commissioned for a voyage of discovery to the South, and having obtained a reluctant consent from my master, De Decker, the merchant, to Hartog's proposal I gladly abandoned the office desk for the sea.

The discovery of America by Christopher Columbus in 1492 had given rise to a theory that a vast continent known as Terra Australis existed in the South, and Portuguese and Spanish ships had made report from time to time of this southern land. It was to confirm or dispel this belief that the voyage of Dirk Hartog was made.

For many months after leaving Amsterdam we sailed south, touching at some islands to obtain vegetable food and replenish our water-casks. Worn out with hardship, our crew more than once showed signs of mutiny. Sometimes for weeks together we lay becalmed in the tropics, when the air hung like a pall of vapour from the sky, and the pitch boiled and blistered in the seams of the deck-planks. In other seasons we were driven by storm and stress. But at length, in spite of every obstacle, an unbroken coast stretched before us far as the eye could reach. For three days we sailed past verdure-covered hills, white, sandy beaches, and bluff headlands, until Hartog felt assured the Great South Continent was at last in very truth before him.

The day upon which Hartog determined to land was bright and fine; the place a sandy beach upon which the waves broke in frothy spume. We were all keen to be ashore after so long a spell of the sea, and I reckoned myself in luck to be chosen as one of the boat's crew to land the captain.

"Let Peter come," said Hartog when the boat was alongside. "I would have him engrave a plate to be set in some safe place, so that it may be known that I, Dirk Hartog, landed here, to any who may come after me."

When we had come to the shore Hartog, taking the boat's crew with him, set off inland, leaving me to my work....