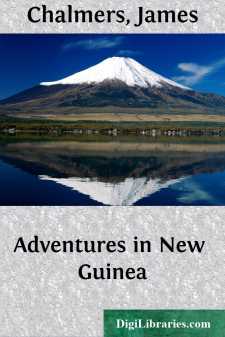 Public attention has been repeatedly and prominently directed to New Guinea during the last few months.  The name often appears in our newspapers and missionary reports, and bids fair to take a somewhat prominent place in our blue-books.  Yet very few general readers possess accurate information about the island itself, about the work of English missionaries there, or about the part New Guinea seems destined to play in Australian politics.  Hence a brief sketch indicating the present state of knowledge on these points will be a fitting introduction to the narratives of exploration, of adventure, and of Christian work contained in this volume.

New Guinea, if we may take Australia as a continent, is the largest island in the world, being, roughly speaking, about 1400 miles long, and 490 broad at its widest point.  Its northernmost coast nearly touches the equator, and its southernmost stretches down to 11° south latitude.  Little more than the fringe or coastline of the island has been at all carefully explored, but it is known to possess magnificent mountain ranges, vast stretches of beautiful scenery, much land that is fruitful, even under native cultivation, and mighty rivers that take their rise far inland.  Its savage inhabitants have aroused powerfully the interest and sympathy alike of Christian Polynesians and English missionaries, who, taking their lives in their hands, have, in not a few instances, laid them down in the effort to win New Guinea for Christ.

At some remote period of the past, New Guinea, in all probability, formed a part of Australia.  Torres Strait itself is only about sixty miles wide; the water is shallow; shoals and reefs abound, giving the sailor who threads the intricate and dangerous navigation the impression that he is sailing over what was once solid earth.

The first European sailor who sighted the island was D’Abreu, in 1511; the honour of being first to land belongs most probably to the Portuguese explorer, Don Jorge De Meneses, in 1526, on his way from Malacca to the Moluccas.

Into the somewhat intricate history of the connection of the Dutch with the north-west coast of New Guinea we cannot here enter.  As suzerain nominally under the Sultan of Tidore, they claim possession of the western part of the island as far east as Lat. 141° 47' E.  The trade they carry on is said to be worth about 20,000l. a year.  Dutch missionaries have for many years been stationed around the coast of Geelvink Bay.

In 1770, Captain Cook visited the south-west coast, and in 1775, an English officer, Forrest by name, spent some months on the north-east coast in search of spices.  In 1793, New Guinea was annexed by two of the East India Company’s commanders, and an island in Geelvink Bay, Manasvari by name, was for a time held by their troops.

Partial surveys of the south coast were made in 1845 by Captain Blackwood, who discovered the Fly River; by Lieutenant Yule, in 1846, who journeyed east as far as the island to which he has given his name; and in 1848 by Captain Owen Stanley, who made a fairly accurate survey of the south-east coast.

The most important survey work along the coast of New Guinea was done in 1873 by H.M. ship Basilisk, under the command of Captain Moresby.  He discovered the now-famous harbour, Port Moresby; he laid down the true eastern coastline of the island, discovering the China Straits, and exploring the north-east coast as far west as Huon Gulf.

In many parts of the world Christian missionaries have been the first to get on friendly terms with the natives, and thus to pave the way for developing the resources of a savage country and leading its inhabitants in the paths of progress and civilization.  Pre-eminently has this been the case in South-eastern New Guinea.  White men had landed before them, it is true; but for the most part only to benefit themselves, and not unfrequently to murder the natives or to entrap them into slavery.  Christianity has won great victories in Polynesia, but no part of the globe has witnessed fouler crimes or more atrocious wickedness on the part of white men towards savage races.

The history of the work done by members of the London Missionary Society is already a long one.  As far back as 1871, the Revs....