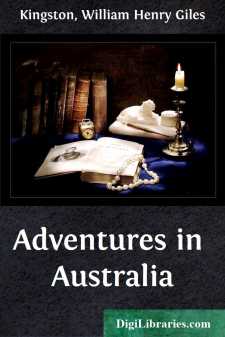 Some years ago two travellers, mounted on wiry yet strong looking steeds, were wending their way through a forest in Australia. They were both young and dressed much alike in broad-brimmed pith hats, loose red shirts, corduroy trousers and high boots with spurs.

Each of them had stuck in his belt an axe, a brace of pistols, and a long knife; while at his back was slung a serviceable-looking rifle, showing that they were prepared to defend themselves, should they encounter any treacherous blacks, a very possible contingency at that period of the country’s history.

They were followed by an active native also mounted, who led a horse carrying their baggage. The scenery was not especially attractive, indeed so great was its sameness that alone they would have been utterly unable to find their way. On either side rose tall stringy-bark and other gum-trees, their curious and narrow leaves affording scarcely any shelter from the rays of the almost vertical sun, the huge white stems from which the bark hung down in ragged masses giving them a weird and dreary aspect. Tracks there were, but they branched now in one direction now in the other, and were more calculated to bewilder the travellers than to guide them aright. Their map—for being new arrivals in the country they carried one—told them that they should soon reach a broad stream. They were now looking out eagerly for it, wondering whether they should have to wade through it or should find a ferry-boat ready to take them and their animals across.

I may as well say—having thus begun, after the fashion of a writer whose pure and wholesome works I used heartily to enjoy in my boyhood days—that one of the travellers was myself, Maurice Thurston, and the other my brother Guy, a year only my senior. We had lately lost our father, with whose sanction we had settled some time before to come out to Australia and seek our fortunes. We, our mother, our two sisters, and another brother, had been left with a very limited income; and Guy and I, wishing to push our own fortunes and establish a home for the rest of the family, agreed that no time should be lost in carrying our plan into execution. As soon therefore as our mother’s affairs had been settled, we set sail from England, and, about two weeks before the day I am describing, arrived in Australia. We had not come entirely on a wild-goose chase. A cousin of our father’s, Mr Oliver Strong, had long been settled in the country, and had replied to an application made to him some time before by our father, saying that he should be happy to receive us and put us in the way of doing well for ourselves, if we were sober, steady, strong, active, willing fellows with heads on our shoulders and without any “fine gentleman” notions.

We were now making our way toward his station, some hundred miles in the interior. Though we had not ridden far from our camping place, the intense heat of the sun made us feel very thirsty, and sympathise with our horses which must have been equally so; thus we were anxious as soon as possible to reach the river, where we hoped to find an abundance of water....