Adventures in Africa By an African Trader 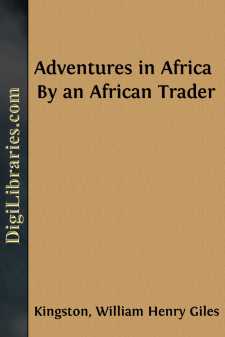 “How many more days, Jan, will it be before we get across this abominable desert?” I asked of our black guide, as we trudged along, he leading our sole remaining ox, while my uncle, Mr Roger Farley, and I led our two horses laden with the remnants of our property.

“May be ten days, may be two ten,” answered Jan Jigger, whose knowledge of numerals was somewhat limited.

I gave a groan, for I was footsore and weary, and expected to have had a more satisfactory answer. We were making our way over a light-coloured soft sand, sprinkled in some places with tall grass, rising in tufts, with bare spots between them. In other parts were various creeping plants, and also—though I called the region a desert—there were extensive patches of bushes, above which here and there rose clumps of trees of considerable height. This large amount of vegetation, however, managed to exist without streams or pools, and for miles and miles together we had met with no water to quench our own thirst or that of our weary beasts. My uncle was engaged in the adventurous and not unprofitable occupation of trading with the natives in the interior of Africa. He had come down south some months before to dispose of the produce of his industry at Graham’s Town, where I had joined him, having been sent for from England. After purchasing a fresh supply of goods, arms, powder, and shot, and giving a thorough repair to his waggons, he had again set off northward for the neighbourhood of lake Ngami, where he was to meet his partner, Mr Welbourn, who had with him his son Harry, with whom I had been at school, and who was about my own age. We had, beyond the borders of the colony, been attacked by a party of savages, instigated by the Boers, two or three of whom indeed led them. They had deprived us of our cattle and men, we having escaped with a small portion only of our goods, two of our horses, a single ox and our one faithful Bechuana. To get away from our enemies we had taken a route unusually followed across the Kalahari desert. We were aware of the dangers and difficulties to be encountered, but the road was much shorter than round either to the east or west; and though we knew that wild animals abounded, including elephants, rhinoceroses, lions, leopards, and hyaenas, yet we believed that we should be able to contend with them, and that we should not be impeded by human savages. Day after day we trudged forward. The only water we could obtain was by digging into certain depressions in the ground which our guide pointed out, when, having scraped out the sand with the single spade we possessed and our hands, we arrived at a hard stratum, beyond which he advised us not to go. In a short time the water began to flow in slowly, increasing by degrees until we had enough for ourselves and our cattle.

We had now, however, been travelling sixty miles or more, without finding one of these water-holes; and though we had still a small quantity of the precious liquid for ourselves, our poor horses and ox had begun to suffer greatly....