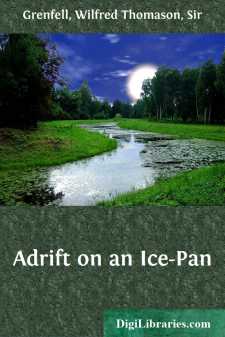 "Most Noble Vice-Chancellor, and You, Eminent Proctors:

"A citizen of Britain is before you, once a student in this University, now better known to the people of the New World than to our own. This is the man who fifteen years ago went to the coast of Labrador, to succor with medical aid the solitary fishermen of the northern sea; in executing which service he despised the perils of the ocean, which are there most terrible, in order to bring comfort and light to the wretched and sorrowing. Thus, up to the measure of human ability, he seems to follow, if it is right to say it of any one, in the footsteps of Christ Himself, as a truly Christian man. Rightly then we praise him by whose praise not he alone, but our University also is honored. I present to you Wilfred Thomason Grenfell, that he may be admitted to the degree of Doctor in Medicine, HONORIS CAUSA."

Thus may be rendered the Latin address when, in May, 1907, for the first time in its history, the University of Oxford conferred the honorary degree in medicine. With these fitting words was presented a man whose simple faith has been the motive power of his works, to whom pain and weariness of flesh have called no stay since there was discouragement never, to whom personal danger has counted as nothing since fear is incomprehensible. "As the Lord wills, whether for wreck or service, I am about His business." On November 9th of the preceding year, the King of England gave one of his "Birthday Honors" to the same man, making him a Companion of St. Michael and St. George (C.M.G.).

Wilfred Thomason Grenfell, second son of the Rev. Algernon Sydney Grenfell and Jane Georgiana Hutchinson, was born on the twenty-eighth day of February, eighteen hundred and sixty-five, at Mostyn House School, Parkgate, by Chester, England, of an ancestry which laid a firm foundation for his career and in surroundings which fitted him for it. On both sides of his inheritance have been exhibited the courage, patience, persistence, and fighting and teaching qualities which are exemplified in his own abilities to command, to administer, and to uplift.

On his father's side were the Grenvilles, who made good account of themselves in such cause as they approved, among them Basil Grenville, commander of the Royalist Cornish Army, killed at Lansdown in 1643 in defence of King Charles.

There was also Sir Richard Grenville, immortalized by Tennyson in "The Revenge," and John Pascoe Grenville, the right-hand man of Admiral Cochrane, who boarded the Spanish admiral's ship, the Esmeralda, on the port side, while Cochrane came up on the starboard, when together they made short work of the capture. Nor has the strain died out, as is demonstrated in the present generation by many of Dr. Grenfell's cousins, among them General Francis Wallace Grenfell, Lord Kilvey, and by Dr. Grenfell himself on the Labrador in the fight against disease and disaster and distress along a stormy and uncharted coast....