Adrift in the Wilds or, The Adventures of Two Shipwrecked Boys 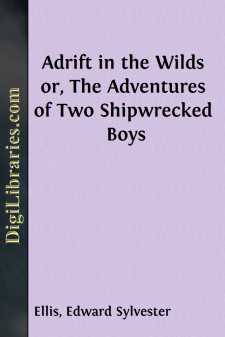 One beautiful misummer night in 18— a large, heavily laden steamer was making her way swiftly up the Pacific coast, in the direction of San Francisco. She was opposite the California shore, only a day's sail distant from the City of the Golden Gate, and many of the passengers had already begun making preparations for landing, even though a whole night and the better part of a day was to intervene ere they could expect to set their feet upon solid land.

She was one of those magnificent steamers that ply regularly between Panama and California. She had rather more than her full cargo of freight and passengers; but, among the hundreds of the latter, we have to do with but three.

On this moonlight night, there were gathered by themselves these three personages, consisting of Tim O'Rooney, Elwood Brandon and Howard Lawrence. The first was a burly, good-natured Irishman, and the two latter were cousins, their ages differing by less than a month, and both being in their sixteenth year.

The financial storm that swept over the country in 18—, toppling down merchants and banking-houses like so many ten-pins, carried with it in the general wreck and ruin, that of Brandon, Herman & Co., and the senior partner, Sylvanus Brandon, returned to his home in Brooklyn, New York, one evening worse than penniless. While he was meditating, dejected and gloomy, as to the means by which he was to keep the wolf from the door, his clerk brought him a letter which had been overlooked in the afternoon's mail, postmarked, "San Francisco, Cal." At once he recognized the bold, handsome superscription as that of his kind-hearted brother-in-law, Thomas Lawrence. His heart beat with a strong hope as he broke the envelope, and his eyes glistened ere he had read one-half.

In short, it stated that Mr. Lawrence had established himself successfully in business, and was doing so well that he felt the imperative need of a partner, and ended by urging Mr. Brandon to accept the position. The bankrupt merchant laid the epistle in his lap, removed his spectacles and looked smilingly toward his wife. They held a long discussion, and both decided to accept the offer at once, as there was no other recourse left to them.

It was evident from the letter that Mr. Lawrence had some apprehensions regarding Mr. Brandon's ability to weather the storm, but he could not be aware of his financial crash, as it had only become known on the street within the last twenty-four hours. Mr. Brandon deemed it proper, therefore, before closing with the offer, to acquaint his brother-in-law with his circumstances, that he might fully understand the disadvantage under which he would be placed by the new partnership.

The letter was written and duly posted, and our friends rather anxiously awaited the answer. It came in the gratifying form of a draft for $1,000 to defray "his necessary expenses," and an urgent entreaty to start without delay.

The advice was acted upon, and within two weeks of the reception of the second letter, Mr....