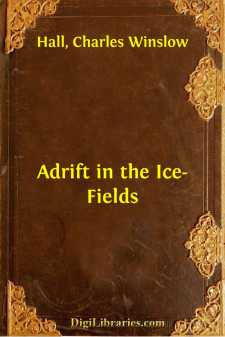 Five hundred miles away to the north and east lies the snug little Island of St. Jean; a beautiful land in summer, with its red cliffs of red sandstone and ruddy clay, surmounted by green fields, which stretch away inland to small areas of the primeval forest, which once extended unbroken from the shores of the Gulf of St. Lawrence to the waters of the Straits of Northumberland.

Drear and desolate is it in winter, when the straits are filled with ice, which, in the shape of floe, and berg, and pinnacle, pass in ghostly procession to and fro, as the wind wafts them, or they feel the diurnal impetus of the tides they cover, to escape in time from the narrow limits of the pass, and lose themselves in the vast ice-barrier that for five long months shuts out the havens of St. Jean from the open sea.

No ship can enter the deserted ports, over whose icy covering the farmer carries home his year's firing, and the young gallant presses his horse to his greatest speed to beat a rival team, or carry his fair companion to some scene of festivity twenty miles away. Many spend the whole winter in idleness; and to all engaged in aught but professional duties, the time hangs heavily for want of enjoyable out-of-door employment. It is, therefore, a season of rejoicing to the cooped-up sportsman when the middle of March arrives, attended, as is usually the case, by the first lasting thaws, and the advent of a few flocks of wild geese.

Among the wealthier sportsmen great preparations are made for a spring campaign, which often lasts six or eight weeks. Decoys of wood, sheet-iron, and canvas, boats for decoy-shooting and stealthy approach, warm clothes, caps, and mittens of spotless white, powder by the keg, caps and wads by the thousand, and shot by the bag, boots and moccasins water and frost proof, and a vast variety of small stores for the inner man, are among the necessaries provided, sometimes weeks in advance of the coming of the few scattering flocks which form, as it were, the skirmish line of the migrating hosts of the Canada goose.

It is usual for a small party to board with some farmer, as near as possible to the shooting grounds, or rather ice, for not infrequently the strong-winged foragers, who press so closely on the rearguard of the retreating frost king, find nothing in the shape of open water; but after leaving their comrades, dead and dying, amid the fatal decoys on the frozen channels, sweep hastily southward before cold, fatigue, hunger, and the wiles and weapons of man, can finish the deadly work so thoroughly begun.

Such a party of six, in the spring of 186-, took up their quarters with Captain Lund, a pilot, who held the larger portion of the arable land of the little Island of St. Pierre, which lies three miles south of the mouth of the harbor of C., and ends in two long and dangerous shoals, known as the East and West Bars.

The party was composed of Messrs. Risk, Davies (younger and older), Kennedy, Creamer, and La Salle. Mr. Henry Risk was an English gentleman, of about fifty-five years of age, handsome, portly, and genial, a keen sportsman, and sure shot with the long, single, English ducking-gun, to which he stuck, despite of the jeers and remonstrances of the owners of muzzle and breech-loading double barrels....