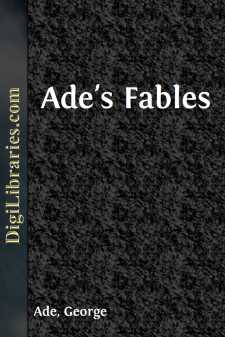 Ambition came, with Sterling Silver Breast-Plate and Flaming Sword, and sat beside a Tad aged 5. The wee Hopeful lived in a Frame House with Box Pillars in front and Hollyhocks leading down toward the Pike.

"Whither shall I guide you?" asked Ambition. "Are you far enough from the Shell to have any definite Hankering?"

"I have spent many Hours brooding over the possibilities of the Future," replied the Larva. "I want to grow up to be a Joey in a Circus. I fairly ache to sit in a Red Wagon just behind the Band and drive a Trick Mule with little pieces of Looking Glass in the Harness. I want to pull Mugs at all the scared Country Girls peeking out of the Wagon Beds. The Town Boys will leave the Elephant and trail behind my comical Chariot. In my Hour of Triumph the Air will be impregnated with Calliope Music and the Smell of Pop-Corn, modified by Wild Animals."

Ambition went out to make the proper Bookings with Destiny. When he came back the Boy was ten years old.

"We started wrong," whispered Ambition, curling up in the cool grass near the Day-Dreamer. "The Trick Mule and the Red Cart are all very well for little Fraidy-Cats and Softies, but a brave Youth of High Spirit should tread the Deck of his own Ship with a Cutlass under his Red Sash. Aye, that is Blood gauming up the Scuppers, but is the Captain chicken-hearted? Up with the Black Flag! Let it be give and take, with Pieces of Eight for the Victor!"

So it was settled that the Lad was to hurry through the Graded Schools and then get at his Buccaneering.

But Ambition came back with a revised Program. "You are now Fifteen Years of Age," said the Wonderful Guide with the glittering Suit. "It is High Time that you planned a Noble Career, following a Straight Course from which there shall be no Deviation. The Pirate is a mere swaggering Bravo and almost Unscrupulous at times. Why not be a great Military Commander? The Procedure is Simple. Your Father gives the Finger to the Congressman and then you step off the Boat at West Point. Next thing you know, you are wearing a Nobby Uniform right out on the Parade Ground, while bevies of Debutantes from New York City and other Points admire you for the stern Profile and Military Set-Up. After that you will subdue many Savage Tribes, and then you will march up Pennsylvania Avenue at the head of the whole Regular Army, and the President of the United States will be waiting on the Front Porch of the White House to present you with a jewelled Sword on behalf of a Grateful Nation."

"You are right," said the Stripling. His eyes were like Saucers, and his Nostrils quivered. "I will be Commander-in-Chief, and after I am laid away, with the Cannon booming, the Folks in this very Town will put up a Statue of Me at the corner of Sixth and Main, so the Street- Cars will have to circle to get around it."

Consequently, when he was in his 21st Year, he was sitting at a highDesk in an Office watching the Birds on a Telegraph Wire. TheKnowledge he had acquired at the two Prep Schools before being pushedinto the Fresh Air ahead of Time had not made him round-shouldered....