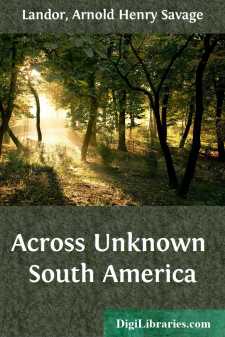 South America is, to my mind, "the Coming Continent"—the Continent of the future. Everybody knows the wealth of the Argentine, Peru, Chile, and Bolivia; but the interior of Brazil, the largest and richest country of all, not unlike forbidden Tibet, was perhaps better known a century or two ago than now. Few people realize that Brazil is larger than the United States of North America, Germany, Portugal, and a few other countries taken together. The interior is practically a terra incognita—although the ancient Jesuits and, at a later date, escaped slaves and native rubber collectors have perhaps found their way inland to a considerable distance.

When I started on the transcontinental journey I did not take Europeans with me. It is not easy to find men who can stand the strain of so long a journey. I was also not surprised, although I was disappointed, not to be able to obtain suitable officers in Brazil to go part of the journey with me, so that I might be relieved of a portion of the tedious scientific work of the expedition, especially taking and computing daily astronomical observations, to which much time has to be devoted. All the work of all kinds eventually fell upon my shoulders, and after departing I found myself filling the posts of surveyor, hydrographer, cartographer, geologist, meteorologist, anthropologist, botanist, doctor, veterinary surgeon, painter, photographer, boat-builder, guide, navigator, etc. The muleteers who accompanied me—only six, all counted—were of little help to me—perhaps the reverse. So that, considering all the adventures and misfortunes we had, I am sure the reader, after perusing this book, will wonder that we got back at all, and will be indulgent enough to give me a little credit for saving, through innumerable disasters—and perhaps not altogether by mere luck—all my photographs (800 of them), all my note-books, all my scientific observations, as well as all the vocabularies I made of the various Indian languages of tribes found on my way. Also for bringing all my men out alive.

Here are, briefly, a few results of the expedition:—

(a) First of all it has proved that, far from South America's being an impenetrable continent—as was believed—it is possible for any experienced traveller to cross Brazil in any direction, if he could obtain suitable followers.

(b) It has proved that the "millions of savage Indians" supposed to be swarming all over the interior of Brazil do not exist at all. All the pure Indians of Central Brazil taken together may number a few hundreds, or including half-castes (negroes and Portuguese), a few thousands. As for the wild beasts and snakes, no one ever need fear being troubled by them. They are more afraid of you than you of them, you can take my word for it. So that the terror which has so far prevented people penetrating the interior has no reasonable ground, and this book ought to be the means of making European people some day swarm to develop that marvellous land now absolutely uninhabited.

(d) Altitude observations, forming a complete chain and including all minor undulations, were registered across the entire South American continent from the Atlantic coast at Rio de Janeiro as far as Callao on the Pacific coast. The observations were taken with a hypsometer and several excellent aneroids. These show that many of the elevations marked on the existing maps of Brazil are inaccurate, the error amounting sometimes to several hundred feet.

(e) A complete survey was made of new country between the Araguaya river and the Madeira, including a careful survey of the Arinos river and the river Arinos-Juruena, one of the most powerful tributaries of the Amazon. In the small map, reproduced from the best existing maps, at the end of the first volume, several high mountain ranges, quite as high as the Andes, may be noticed extending from north to south between the rivers Madeira, Tapajoz, Xingu, Araguaya and Tocantins. Those high ranges are merely the work of imaginative cartographers, who have drawn them to make the map look pretty. They do not exist. I have left them in order to draw the attention of the reader to them....