Across the Equator A Holiday Trip in Java 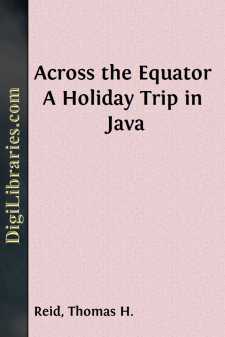 When consideration is given to the fact that Java is only two days' steaming from Singapore, that it is more beautiful in some respects than Japan, that it contains marvellous archaeological remains over 1,100 years old, and that its hill resorts form ideal resting places for the jaded European, it is strange that few of the British residents throughout the Far East, or travellers East and West, have visited the Dutch Colony.

The average Britisher, weaving the web of empire, passes like a shuttle in the loom from London to Yokohama, from Hongkong to Marseilles. He thinks imperially in that he thinks no other nation has Colonies worth seeing. British port succeeds British port on the hackneyed line of travel, and he may be excused if he forgets that these convenient calling places, these links of Empire, can have possible rivals under foreign flags.

There is no excuse for the prevailing ignorance of the Netherland Indies. We do not wish it to be inferred that we imagine we have discovered Java, as Dickens is said to have discovered Italy, but we believe we are justified in saying that few have realised the possibilities of Java as a health resort and the attractions it has to offer for a holiday.

Miss Marianne North, celebrated as painter and authoress and the rival of Miss Mary Kingsley and Mrs. Bishop (Isabella Bird) as a traveller in unfrequented quarters of the globe, has described the island as one magnificent garden, surpassing Brazil, Jamaica and other countries visited by her, and possessing the grandest of volcanoes; and other famous travellers have written in terms of the highest praise of its natural beauties.

Its accessibility is one of its recommendations to the holiday maker. The voyage across the Equator from Singapore is a smooth one, for the most part through narrow straits and seldom out of sight of islands clad with verdure down to the water's edge.

Excellent accommodation is provided by the Rival Dutch Mail steamers running between Europe and Java and the Royal Packet Company's local steamers, and the Government of the Netherland Indies co-operates with a recently-formed Association for the encouragement of tourist traffic on the lines of the Welcome Society in Japan. This Association has a bureau, temporarily established in the Hotel des Indes in Batavia, to provide information and travelling facilities for tourists, not only throughout Java, but amongst the various islands that are being brought under the sway of civilised government by the Dutch Colonial forces.

As our steamer pounded her way out of Singapore Harbour in the early morning, islands appeared to spring out of the sea, and seascape after seascape followed in rapid succession, suggesting the old-fashioned panoramic pictures of childhood's acquaintance. One's idea of scenery, after all, is more or less a matter of comparison. One passenger compares the scene with the Kyles of Bute; another with the Inland Sea of Japan, at the other end of the world. Yet, this tropical waterway is unlike either, and has a characteristic individuality of its own, none the less charming because of the comparisons it suggests and the associations it recalls....