Across Mongolian Plains A Naturalist's Account of China's 'Great Northwest' 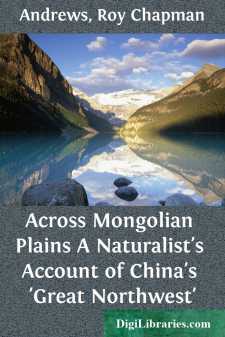 During 1916-1917 the First Asiatic Expedition of the American Museum of Natural History carried on zoölogical explorations along the frontiers of Tibet and Burma in the little known province of Yün-nan, China. The narrative of that expedition has already been given to the public in the first book of this series "Camps and Trails in China." It was always the intention of the American Museum to continue the Asiatic investigations, and my presence in China on other work in 1918 gave the desired opportunity at the conclusion of the war.

Having made extensive collections along the southeastern edge of the great central Asian plateau, it was especially desirable to obtain a representation of the fauna from the northeastern part in preparation for the great expedition which, I am glad to say, is now in course of preparation, and which will conduct work in various other branches of science. Consequently, my wife and I spent one of the most delightful years of our lives in Mongolia and North China on the Second Asiatic Expedition of the American Museum of Natural History.

The present book is the narrative of our work and travels. As in "Camps and Trails" I have written it entirely from the sportsman's standpoint and have purposely avoided scientific details which would prove uninteresting or wearisome to the general public. Full reports of the expedition's results will appear in due course in the Museum's scientific publications and to them I would refer those readers who wish further details of the Mongolian fauna.

Asia is the most fascinating hunting ground in all the world, not because of the quantity of game to be found there but because of its quality, and scientific importance. Central Asia was the point of origin and distribution for many mammals which inhabit other parts of the earth to-day and the habits and relationships of some of its big game animals are almost unknown. Because of unceasing native persecution, lack of protection, the continued destruction of forests and the ever increasing facilities for transportation to the remote districts of the interior, many of China's most interesting and important forms of wild life are doomed to extermination in the very near future.

Fortunately world museums are awakening to the necessity of obtaining representative series of Asiatic mammals before it is too late, and to the broad vision of the President and Board of Trustees of the American Museum of Natural History my wife and I owe the exceptional opportunities which have been given us to carry on zoölogical explorations in Asia.

We are especially grateful to President Henry Fairfield Osborn, who is ready, always, to support enthusiastically any plans which tend to increase knowledge of China or to strengthen cordial relations between the United States and the Chinese Republic.

Director F. A. Lucas and Assistant Secretary George H. Sherwood have never failed in their attention to the needs of our expeditions when in the field and to them I extend our best thanks....