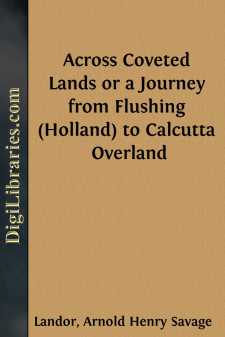 The start—The terrors of the Russian Custom-house—An amusing incident at the Russian frontier—Politeness of Russian officials—Warsaw: its sights; its lovely women—The talented Pole—People who know how to travel by train—A ludicrous scene.

"First single to Baku," I requested when my turn came at the window of the ticket office at Victoria Station.

"Baku?—where is that?" queried the ticket man.

"Oh, I see! Well, we cannot book further than Warsaw for Russia."

My baggage having next been duly registered direct for the capital of Poland, off I set to Queenborough, crossed over by the night boat to Flushing, and continued the following morning by express to Berlin.

Once in the Russian train from the German capital one hears a great deal of the terrors of the approaching Russian Custom-house, and here I may relate rather an amusing incident which will prove what these terrors amount to. In my sleeping car there happened to be some French merchants on their way to the fair of Nijni-Novgorod. On perceiving my two rifles, a good-sized ammunition case, and two cameras, one of the gentlemen gratuitously informed me that if I intended to proceed to Russia I had better leave all these things behind, or they would all be confiscated at the frontier. I begged to differ, and the Frenchmen laughed boisterously at my ignorance, and at what would happen presently. In their imaginative minds they perceived my valued firearms being lost for ever, and predicted my being detained at the police station till it pleased les terribles Cossacques to let me proceed.

"Evidently," shouted one of the Frenchmen at the top of his voice, "this is your first journey abroad. . . . We," he added, "are great travellers. We have been once before in Russia."

"You are great travellers!" I exclaimed, with the emphasis very strong on the are, and pretending intense admiration.

Naturally the Franco-Russian Alliance was dragged into the conversation; were I a Frenchman I might fare less badly. The Russians and the French were brothers. But a British subject! A hated Englishman bringing into Russia two rifles, two revolvers, six hundred cartridges, twelve hundred photographic plates, two cameras, a large case of scientific instruments, all of which I would duly declare! Why? Russia was not England. I should soon experience how Englishmen were treated in some countries. "Russians," he exclaimed, "have not a polished manner like the French. Ah, non! They are semi-barbarians yet. They respect and fear the French, but not the English. . . . par exemple!"

The frontier station of Alexandrovo was reached, and a horde of terror-stricken passengers alighted from the carriages, preceded and followed by bags, portmanteaux, hold-alls, and bundles of umbrellas, which were hastily conveyed to the long tables of the huge Custom-house inspection room.

The two Frenchmen had their belongings next to mine on the long counter, and presently an officer came. They were French subjects and they had nothing to declare. Their elaborately decorated bags were instantly ordered open and turned upside down, while the officer searched with some gusto among the contents now spread on the table. There was a small pocket camera, two packets of photographic plates, some soiled handkerchiefs, collars and cuffs, a box of fancy note-paper, a bottle of scent, a pair of embroidered pantoufles, and a lot of patent brass studs and cuff links.

With the exception of the soiled linen, everything was seized, for all were liable to duty, and some sharp words of reprimand were used by the officer to my now subdued French neighbours for attempting to smuggle.

The officer moved on to me.

"Monsieur," mournfully remarked the Frenchman, "now you will be done for."

I declared everything and produced a special permit, which had been very courteously given me by the Russian Ambassador, and handed it to the officer....