Across China on Foot 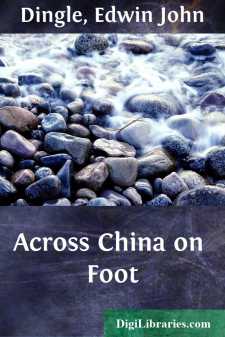 The scheme. Why I am walking across Interior China. Leaving Singapore. Ignorance of life and travel in China. The "China for the Chinese" cry. The New China and the determination of the Government. The voice of the people. The province of Yün-nan and the forward movement. A prophecy. Impressions of Saigon. Comparison of French and English methods. At Hong-Kong. Cold sail up the Whang-poo. Disembarkation. Foreign population of Shanghai. Congestion in the city. Wonderful Shanghai.

Through China from end to end. From Shanghai, 1,500 miles by river and 1,600 miles walking overland, from the greatest port of the Chinese Empire to the frontier of British Burma.

That is my scheme.

I am a journalist, one of the army of the hard-worked who go down early to the Valley. I state this because I would that the truth be told; for whilst engaged in the project with which this book has mainly to deal I was subjected to peculiar designations, such as "explorer" and other newspaper extravagances, and it were well, perhaps, for my reader to know once for all that the writer is merely a newspaper man, at the time on holiday.

The rather extreme idea of walking across this Flowery Land came to me early in the year 1909, although for many years I had cherished the hope of seeing Interior China ere modernity had robbed her and her wonderful people of their isolation and antediluvianism, and ever since childhood my interest in China has always been considerable. A little prior to the Chinese New Year, a friend of mine dined with me at my rooms in Singapore, in the Straits Settlements, and the conversation about China resulted in our decision then and there to travel through the Empire on holiday. He, because at the time he had little else to do; the author, because he thought that a few months' travel in mid-China would, from a journalistic standpoint, be passed profitably, the intention being to arrive home in dear old England late in the summer of the same year.

We agreed to cross China on foot, and accordingly on February 22, 1909, just as the sun was sinking over the beautiful harbor of Singapore—that most valuable strategic Gate of the Far East, where Crown Colonial administration, however, is allowed by a lethargic British Government to become more and more bungled every year—we settled down on board the French mail steamer Nera, bound for Shanghai. My friends, good fellows, in reluctantly speeding me on my way, prophesied that this would prove to be my last long voyage to a last long rest, that the Chinese would never allow me to come out of China alive. Such is the ignorance of the average man concerning the conditions of life and travel in the interior of this Land of Night.

Here, then, was I on my way to that land towards which all the world was straining its eyes, whose nation, above all nations of the earth, was altering for better things, and coming out of its historic shell. "Reform, reform, reform," was the echo, and I myself was on the way to hear it....