Account of a Voyage of Discovery to the West Coast of Corea, and the Great Loo-Choo Island 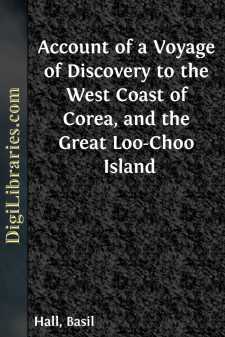 The following work contains a Narrative of the Voyage to the West Coast of Corea, and the Great Loo-choo Island; an Appendix, containing Nautical details; and a Vocabulary of the Language spoken at Loo-choo.

In drawing up the Narrative from journals written at the time, I have derived great assistance from notes made by Lieutenant H.J. Clifford, of the Navy. This officer obtained permission from the Admiralty to accompany me, though on half pay, and having no specific duty to perform, he was enabled to devote himself entirely to the acquisition of knowledge; and had it in his power to record many interesting occurrences of the voyage, which the numerous duties of my station left me but little leisure to observe or describe.

All the Charts, Tables, and Nautical Notices have been placed in an Appendix, in order to avoid the interruption which such details are apt to occasion when inserted in a journal; and the Nautical reader will perhaps consider it advantageous, to have this part of the subject set apart, and condensed, instead of being scattered over the pages of the narrative.

I am indebted to Mr. Clifford for very important assistance in collecting and arranging the materials which form this Appendix.

The northern part of the Chart of the Yellow Sea, given in the Appendix, was taken from a Chart by Captain Daniel Ross, of the Bombay marine, the scientific and able surveyor commanding the squadron which the Honourable East India Company, in the spirit of a liberal and enlarged policy, have employed for upwards of nine years, in surveying the China Seas.

The Vocabulary is exclusively compiled by Mr. Clifford, who took the greatest pains to collect words and sentences in common use; and though, from the shortness of our stay, this part of the work is necessarily incomplete, it is hoped that a future voyager will derive considerable assistance from it, in his intercourse with the natives.

The drawings of scenery and costume were made by Mr. William Havell, the eminent artist who accompanied the Embassy, from sketches taken on the spot, by Mr. C.W. Browne, midshipman of the Alceste, and myself.

Nothing respecting the west side of Corea has hitherto been accurately known to Europeans. The coast laid down in most Charts has been taken from the celebrated map of the Jesuits, which is very correct in what relates to China, but erroneous with respect to Corea. The Jesuits, indeed, did not survey this country, but have inserted it in their map, I believe, from Japanese authorities.

Captain Broughton in his voyage to the North Pacific Ocean visited the South Coast of Corea, and his account of the inhabitants agrees with ours in most particulars.

The same distinguished voyager visited the Great Loo-choo Island in 1797, after having been shipwrecked near Typinsan, one of its dependant islands. He was at Napakiang for a few days, and his account of the natives is highly interesting.

There is an article by Pere Gaubil, a missionary, on the subject of the Loo-choo Islands, in the 23d vol....