Abraham Lincoln and the Union; a chronicle of the embattled North 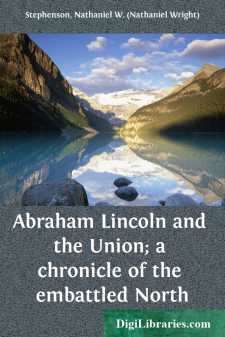 In spite of a lapse of sixty years, the historian who attempts to portray the era of Lincoln is still faced with almost impossible demands and still confronted with arbitrary points of view. It is out of the question, in a book so brief as this must necessarily be, to meet all these demands or to alter these points of view. Interests that are purely local, events that did not with certainty contribute to the final outcome, gossip, as well as the mere caprice of the scholar—these must obviously be set aside.

The task imposed upon the volume resolves itself, at bottom, into just two questions: Why was there a war? Why was the Lincoln Government successful? With these two questions always in mind I have endeavored, on the one hand, to select and consolidate the pertinent facts; on the other, to make clear, even at the cost of explanatory comment, their relations in the historical sequence of cause and effect. This purpose has particularly governed the use of biographical matter, in which the main illustration, of course, is the career of Lincoln. Prominent as it is here made, the Lincoln matter all bears in the last analysis on one point—his control of his support. On that the history of the North hinges. The personal and private Lincoln it is impossible to present within these pages. The public Lincoln, including the character of his mind, is here the essential matter.

The bibliography at the close of the volume indicates the more important books which are at the reader's disposal and which it is unfortunate not to know.

CHAPTER I. THE TWO NATIONS OF THE REPUBLIC

"There is really no Union now between the North and the South.... No two nations upon earth entertain feelings of more bitter rancor toward each other than these two nations of the Republic."

This remark, which is attributed to Senator Benjamin Wade of Ohio, provides the key to American politics in the decade following the Compromise of 1850. To trace this division of the people to its ultimate source, one would have to go far back into colonial times. There was a process of natural selection at work, in the intellectual and economic conditions of the eighteenth century, which inevitably drew together certain types and generated certain forces. This process manifested itself in one form in His Majesty's plantations of the North, and in another in those of the South. As early as the opening of the nineteenth century, the social tendencies of the two regions were already so far alienated that they involved differences which would scarcely admit of reconciliation. It is a truism to say that these differences gradually were concentrated around fundamentally different conceptions of labor—of slave labor in the South, of free labor in the North.

Nothing, however, could be more fallacious than the notion that this growing antagonism was controlled by any deliberate purpose in either part of the country. It was apparently necessary that this Republic in its evolution should proceed from confederation to nationality through an intermediate and apparently reactionary period of sectionalism....