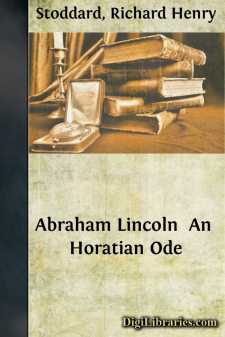 "Had I but died an hour before this chance,I had lived a blessed time; for from this instantThere's nothing serious in mortality:All is but toys: renown and grace is dead;The wine of life is drawn, and the mere leesIs left this vault to brag of.

"After life's fitful fever, he sleeps well;Treason has done his worst: nor steel, nor poison,Malice domestic, foreign levy, nothing,Can touch him further."

Not as when some great Captain fallsIn battle, where his Country calls,    Beyond the struggling lines    That push his dread designs

To doom, by some stray ball struck dead:Or, in the last charge, at the head    Of his determined men,    Who must be victors then!

Nor as when sink the civic Great,The safer pillars of the State,    Whose calm, mature, wise words    Suppress the need of swords—

With no such tears as e'er were shedAbove the noblest of our Dead    Do we to-day deplore    The Man that is no more!

Our sorrow hath a wider scope,Too strange for fear, too vast for hope,—    A Wonder, blind and dumb,    That waits—what is to come!

Not more astounded had we beenIf Madness, that dark night, unseen,    Had in our chambers crept,    And murdered while we slept!

We woke to find a mourning Earth—Our Lares shivered on the hearth,—    The roof-tree fallen,—all    That could affright, appall!

Such thunderbolts, in other lands,Have smitten the rod from royal hands,    But spared, with us, till now,    Each laurelled Cesar's brow!

No Cesar he, whom we lament,A Man without a precedent,    Sent, it would see, to do    His work—and perish too!

Not by the weary cares of State,The endless tasks, which will not wait,    Which, often done in vain,    Must yet be done again:

Not in the dark, wild tide of War,Which rose so high, and rolled so far,    Sweeping from sea to sea    In awful anarchy:—

Four fateful years of mortal strife,Which slowly drained the Nation's life,    (Yet, for each drop that ran    There sprang an armed man!)

Not then;—but when by measures meet,—By victory, and by defeat,—    By courage, patience, skill,    The People's fixed "We will!"