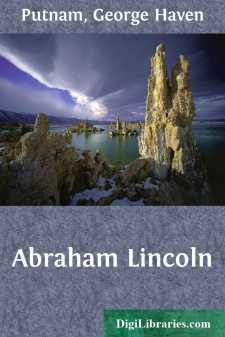 THE EVOLUTION OF THE MAN

On the twelfth of February, 1909, the hundredth anniversary of the birth of Abraham Lincoln, Americans gathered together, throughout the entire country, to honour the memory of a great American, one who may come to be accepted as the greatest of Americans. It was in every way fitting that this honour should be rendered to Abraham Lincoln and that, on such commemoration day, his fellow-citizens should not fail to bear also in honoured memory the thousands of other good Americans who like Lincoln gave their lives for their country and without whose loyal devotion Lincoln's leadership would have been in vain.

The chief purpose, however, as I understand, of a memorial service is not so much to glorify the dead as to enlighten and inspire the living. We borrow the thought of his own Gettysburg address (so eloquent in its exquisite simplicity) when we say that no words of ours can add any glory to the name of Abraham Lincoln. His work is accomplished. His fame is secure. It is for us, his fellow-citizens, for the older men who had personal touch with the great struggle in which Lincoln was the nation's leader, for the younger men who have grown up in the generation since the War, and for the children by whom are to be handed down through the new century the great traditions of the Republic, to secure from the life and character of our great leader incentive, illumination, and inspiration to good citizenship, in order that Lincoln and his fellow-martyrs shall not have died in vain.

It is possible within the limits of this paper simply to touch upon the chief events and experiences in Lincoln's life. It has been my endeavour to select those that were the most important in the forming or in the expression of his character. The term "forming" is, however, not adequate to indicate the development of a personality like Lincoln's. We rather think of his sturdy character as having been forged into its final form through the fiery furnace of fierce struggle, as hammered out under the blows of difficulties and disasters, and as pressed beneath the weight of the nation's burdens, until was at last produced the finely tempered nature of the man we know, the Lincoln of history, that exquisite combination of sweetness of nature and strength of character. The type is described in Schiller's Song of the Founding of the Bell:

There is a tendency to apply the term "miraculous" to the career of every hero, and in a sense such description is, of course, true. The life of every man, however restricted its range, is something of a miracle; but the course of a single life, like that of humanity, is assuredly based on a development that proceeds from a series of causations. Holmes says that the education of a man begins two centuries before his birth. We may recall in this connection that Lincoln came of good stock. It is true that his parents belonged to the class of poor whites; but the Lincoln family can be traced from an eastern county of England (we might hope for the purpose of genealogical harmony that the county was Lincolnshire) to Hingham in Massachusetts, and by way of Pennsylvania and Virginia to Kentucky....