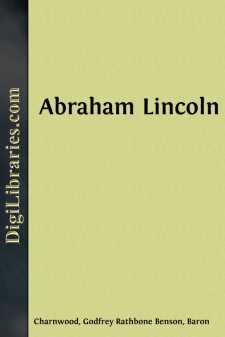 Add to My Favorites
Published: 9 years ago
Downloads: 152
Rating: (0 Votes)

CHAPTER I BOYHOOD OF LINCOLN

The subject of this memoir is revered by multitudes of his countrymen as the preserver of their commonwealth. This reverence has grown with the lapse of time and the accumulation of evidence. It is blended with a peculiar affection, seldom bestowed upon the memory of statesmen. It is shared to-day by many who remember with no less affection how their own fathers fought against him. He died with every circumstance of tragedy, yet it is not the accident of his death but the purpose of his life that is remembered.

Readers of history in another country cannot doubt that the praise so given is rightly given; yet any bare record of the American Civil War may leave them wondering why it has been so unquestioningly accorded. The position and task of the American President in that crisis cannot be understood from those of other historic rulers or historic leaders of a people; and it may seem as if, after that tremendous conflict in which there was no lack of heroes, some perverse whim had made men single out for glory the puzzled civil magistrate who sat by. Thus when an English writer tells again this tale, which has been well told already and in which there can remain no important new facts to disclose, he must endeavour to make clear to Englishmen circumstances and conditions which are familiar to Americans. He will incur the certainty that here and there his own perspective of American affairs and persons will be false, or his own touch unsympathetic. He had better do this than chronicle sayings and doings which to him and to those for whom he writes have no significance. Nor should the writer shrink too timidly from the display of a partisanship which, on one side or the other, it would be insensate not to feel. The true obligation of impartiality is that he should conceal no fact which, in his own mind, tells against his views.

Abraham Lincoln, sixteenth President of the United States of America, was born on February 12, 1809, in a log cabin on a barren farm in the backwoods of Kentucky, about three miles west of a place called Hodgensville in what is now La Rue County.

Fifty years later when he had been nominated for the Presidency he was asked for material for an account of his early life. "Why," he said, "it is a great folly to attempt to make anything out of me or my early life. It can all be condensed into a single sentence; and that sentence you will find in Gray's 'Elegy':—

"'The short and simple annals of the poor.'

That's my life, and that's all you or anyone else can make out of it." His other references to early days were rare. He would repeat queer reminiscences of the backwoods to illustrate questions of state; but of his own part in that old life he spoke reluctantly and sadly. Nevertheless there was once extracted from him an awkward autobiographical fragment, and his friends have collected and recorded concerning his earlier years quite as much as is common in great men's biographies or can as a rule be reproduced with its true associations....