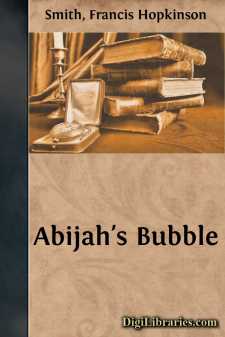 Ezekiel Todd, her dry, tight-fisted, lean father, had named her, bawling it out so loud that the more suitable, certainly the more euphonious, "Evangeline," proffered in a timid whisper by her faded and somewhat romantic mother, was completely smothered.

The women were furious.

"Jes' like Zeke Todd. He's too ornery to live. I come mighty near speakin' right out, and hadn't been that Martha held on to me I would. Call her Abbie, for short, Mrs. Todd," exclaimed Deacon Libby's wife, "and shame him."

Abbie never minded it. She was too little to remember, she always said, and there were few people in the village of Taylorsville present at the christening who did.

Old Si Spavey, however, never forgot. "You kin call yourself Abbie if you choose," he used to say, "and 'tain't none o' my business, but I was in the meetin'-house and heard Zeke let drive, and b'gosh it sounded just like a buzz-saw strikin' the butt-end of a log. 'Abijah! Abijah! he hollered. Shet Parson Simmons up same's a steel trap. Gosh, but it was funny!"

Only twice since the christening had she to face the consequences of her father's ill temper. This was after his death, when the needs of the poor mother made a small mortgage imperative and she must sign as a witness. It came with a certain shock, but there was no help for it, and she went through the ordeal bravely, dotting the "i" and giving a little flourish to the tail of the "h".

The second time was when she signed her application for the position of postmistress of the village. The big mill-owner, Hiram Taylor, brought her the paper.

"Got to put it all in, Miss Abbie," he said with a laugh. "Shut your eyes and sign it and then forget it. Awful, ain't it?—but that's the law, and there ain't no way of getting round it, I guess."

Hiram Taylor had left the village years before, rather suddenly, some had thought, when he was a strapping young fellow of twenty-two or three, and had moved West and stayed West until he came back the year before with a wife and a houseful of children. Then the lawyers in the village got busy, and pretty soon some builders came down from Boston, only fifty miles away, and then a lot of bricklayers; and some cars were switched off on the siding, loaded with lumber and lath and brick, and next a train-load of machinery, and so the mills were running again with Hiram sole owner and in full charge. One of the first things he did after his arrival—the following morning, really—was to look up Abbie's mother. He gave a littie start when he saw how shabby the cottage looked; no paint for years—steps rotting—window-blinds broken, with a hinge loose. He gave a big one when a thin, hollow-chested woman, gray and spare, opened the door at his knock.

"Hiram!" she gasped, and the two went inside, and the door was shut.

All she said when Abbie came home from school—she was teaching that year—was: "The new mill-owner came to see me. His name's Taylor."

That same day a heavy-set man with gray hair and beard, and jet-black eyebrows shading two kindly eyes, got out of his wagon, hitched his horse to a post in front of the school-house and stepped to Abbie's desk....