Abe Lincoln Gets His Chance 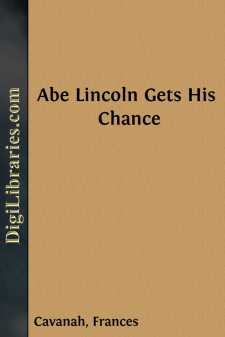 There was a new boy baby at the Lincoln cabin! By cracky! thought Dennis Hanks as he hurried up the path, he was going to like having a boy cousin. They could go swimming together. Maybe they could play Indian. Dennis pushed open the cabin door.

"Sh!" A neighbor, who had come in to help, put her finger to her lips. "The baby is asleep."

Nancy Lincoln was lying on the pole bed in a corner of the one-room house. She looked very white under the dark bearskin covering, but when she heard Dennis she raised her head. "It's all right, Denny," she said. "You can see him now."

Dennis tiptoed over to the bed. A small bundle, wrapped in a homespun shawl, rested in the curve of Nancy's arm. When she pulled back the shawl, Dennis could not think of anything to say. The baby was so wrinkled and so red. It looked just like a cherry after the juice had been squeezed out.

Nancy touched one of the tiny hands with the tip of her finger. "See his wee red fists and the way he throws them around!" she said.

"We're calling him after his grandpappy. Abraham Lincoln!"

"That great big name for that scrawny little mite?"

Nancy sounded hurt. "Give him a chance to grow, will you?"

Then she saw that Dennis was only teasing. "You wait!" she went on. "It won't be long before Abe will be running around in buckskin breeches and a coonskin cap."

The door opened, and Tom Lincoln, the baby's father, came in. With him was Aunt Betsy Sparrow. She kissed Nancy and carried the baby over to a stool by the fireplace. Making little cooing noises under her breath, she dressed him in a white shirt and a yellow flannel petticoat. Sally Lincoln, two years old, who did not know quite what to make of the new brother, came over and stood beside her. Dennis drew up another stool and watched.

Aunt Betsy looked across at him and smiled. Dennis, an orphan, lived with her and she knew that he was often lonely. There weren't many people living in Kentucky in the year 1809, and Dennis had no boys to play with.

"I reckon you're mighty tickled to have a new cousin," she said.

Dennis was not quite sure whether he did or not. Before he could answer, Aunt Betsy laid the baby in his arms. Sally edged closer. She started to put out her hand, but pulled it back. Abraham was so small that she was afraid to touch him.

"Don't you fret, Sally," said Dennis. "Cousin Nancy said that he is going to grow. And when he does, do you know what I'm going to do? I'm going to teach him to swim."

Looking down into the tiny red face, Dennis felt a sudden warm glow in his heart. "Yes, and we can go fishing down at the creek. When I go to the mill to get the corn ground, he can come along. He can ride behind me on the horse, and when it goes cloppety-clop—"

Dennis swung the baby back and forth. It puckered up its face and began to cry. Dennis caught his breath in dismay. How could such a large noise come out of such a small body?

He looked at Cousin Nancy out of the corner of his eye. "I reckon he'll never come to much."

"Now, Dennis Hanks, I want you to behave," said Aunt Betsy, but this time Nancy paid no attention to his teasing. She held out her arms for her son and cuddled him against her breast.

It was almost dark by the time Aunt Betsy had tidied the one-room cabin. She cooked some dried berries for Nancy, and fed Sally. Dennis begged to spend the night. After his aunt had put on her shawl and left for her own cabin, he curled up in a bearskin on the floor.

"I mean what day of the month."