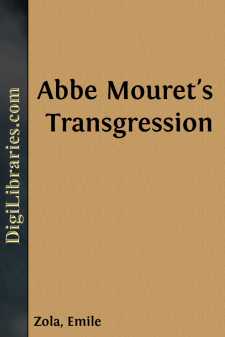 'LA FAUTE DE L'ABBE MOURET' was, with respect to the date of publication, the fourth volume of M. Zola's 'Rougon-Macquart' series; but in the amended and final scheme of that great literary undertaking, it occupies the ninth place. It proceeds from the sixth volume of the series, 'The Conquest of Plassans;' which is followed by the two works that deal with the career of Octave Mouret, Abbe Serge Mouret's elder brother. In 'The Conquest of Plassans,' Serge and his half-witted sister, Desiree, are seen in childhood at their home in Plassans, which is wrecked by the doings of a certain Abbe Faujas and his relatives. Serge Mouret grows up, is called by an instinctive vocation to the priesthood, and becomes parish priest of Les Artaud, a well-nigh pagan hamlet in one of those bare, burning stretches of country with which Provence abounds. And here it is that 'La Faute de l'Abbe Mouret' opens in the old ruinous church, perched upon a hillock in full view of the squalid village, the arid fields, and the great belts of rock which shut in the landscape all around.

There are two elements in this remarkable story, which, from the standpoint of literary style, has never been excelled by anything that M. Zola has since written; and one may glance at it therefore from two points of view. Taking it under its sociological and religious aspect, it will be found to be an indirect indictment of the celibacy of the priesthood; that celibacy, contrary to Nature's fundamental law, which assuredly has largely influenced the destinies of the Roman Catholic Church. To that celibacy, and to all the evils that have sprang from it, may be ascribed much of the irreligion current in France to-day. The periodical reports on criminality issued by the French Ministers of Justice since the foundation of the Republic in 1871, supply materials for a most formidable indictment of that vow of perpetual chastity which Rome exacts from her clergy. Nowadays it is undoubtedly too late for Rome to go back upon that vow and thereby transform the whole of her sacerdotal organisation; but, perhaps, had she done so in past times, before the spirit of inquiry and free examination came into being, she might have assured herself many more centuries of supremacy than have fallen to her lot. But she has ever sought to dissociate the law of the Divinity from the law of Nature, as though indeed the latter were but the invention of the Fiend.

Abbe Mouret, M. Zola's hero, finds himself placed between the law of the Divinity and the law of Nature: and the struggle waged within him by those two forces is a terrible one. That which training has implanted in his mind proves the stronger, and, so far as the canons of the Church can warrant it, he saves his soul. But the problem is not quite frankly put by M. Zola; for if Abbe Mouret transgresses he does so unwittingly, at a time when he is unconscious of his priesthood and has no memory of any vow. When the truth flashes upon him he is horrified with himself, and forthwith returns to the Church....