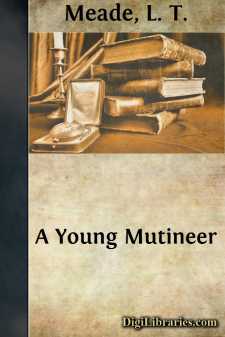 CHAPTER IAN OLD-FASHIONED LITTLE PAIR. Sun and shower—sun and shower—Now rough, now smooth, is the winding way;Thorn and flower—thorn and flower—Which will you gather? Who can say?Wayward hearts, there's a world for your winning,Sorrow and laughter, love or woe:Who can tell in the day's beginningThe paths that your wandering feet shall go?

The village choir were practicing in the church—their voices, somewhat harsh and uncultivated, were sending forth volumes of sound into the summer air. The church doors were thrown open, and a young man dressed in cricketing-flannels was leaning against the porch. He was tall, and square-shouldered, with closely-cropped dark hair, and a keen, intelligent face.

When the music became very loud and discordant he moved impatiently, but as the human voices ceased and the sweet notes of the voluntary sounded in full melody on the little organ, a look of relief swept like a soothing hand over his forehead.

The gates of the Rectory were within a stone's throw of the church. Up the avenue three people might have been seen advancing. Two were children, one an adult. The grown member of this little group was tall and slight; she wore spectacles, and although not specially gifted with wisdom, possessed a particularly wise appearance. The two little girls, who were her pupils, walked somewhat sedately by her side. As they passed the church the governess looked neither to right nor left, but the eldest girl fixed her keen and somewhat hungry eyes with a questioning gaze on the young man who stood in the porch. He nodded back to her a glance full of intelligence, which he further emphasized by a quick and somewhat audacious wink from his left eye. The little girl walked on loftily; she thought that Jasper Quentyns, who was more or less a stranger in the neighborhood, had taken a distinct liberty.

"What's the matter, Judy?" asked the smallest of the girls.

"Nothing," replied Judy quickly. She turned to her governess as she spoke. "Miss Mills, I was very good at my lessons to-day, wasn't I?"

"You are not going to forget what you promised me?"

"Yes, child, of course, if I promised, but we are only just on our walk now. It is a fine autumnal day, and I want to get to the woods to pick some bracken and heather, for your Aunt Marjorie has asked me to fill all the vases for dinner to-night. There are not half enough flowers in the garden, so I must go to the woods, whatever happens. Your sister will have left the church when we return, Judy."

"No, she won't," replied Judy. "The practice will be twice as long as usual to-day because of the Harvest Festival on Sunday."

"Well, if she is there you can go in and wait for her, as you have been a good girl. Now let us talk of something else."

"I have nothing else to talk about," answered Judy, somewhat sulkily....