A Woman's Impression of the Philippines 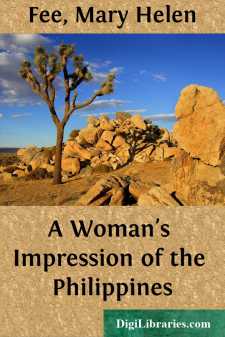 I Find the Transport Ship Buford and My Stateroom—Old Maids and Young Maids Bound for the Orient—The Deceitful Sea—Making New Friends and Acquaintances.

On a hot July day the army transport Buford lay at the Folsom Dock, San Francisco, the Stars and Stripes drooping from her stern, her Blue Peter and a cloud of smoke announcing a speedy departure, and a larger United States flag at her fore-mast signifying that she was bound for an American port. I observed these details as I hurried down the dock accompanied by a small negro and a dressing-bag, but I was not at that time sufficiently educated to read them. I thought only that the Buford seemed very large (she is not large, however), that she was beautifully white and clean; and that I was delighted to be going away to foreign lands upon so fine a ship.

Having recognized with relief a pile of luggage going aboard—luggage which I had carefully pasted with red, white, and blue labels crossed by the letters "U.S.A.T.S." and Buford—I dismissed the negro, grasped the dressing-bag with fervor, and mounted the gangway. To me the occasion was momentous. I was going to see the world, and I was one of an army of enthusiasts enlisted to instruct our little brown brother, and to pass the torch of Occidental knowledge several degrees east of the international date-line.

I asked the first person I met, who happened to be the third officer, where I should go and what I should do. He told me to report at the quartermaster's office at the end of the promenade deck. A white-haired, taciturn gentleman in the uniform of a major, U.S.A., was occupying this apartment, together with a roly-poly clerk in a blue uniform which seemed to be something between naval and military. When I mentioned my name and showed my order for transportation, the senior officer grunted inarticulately, and waved me in the direction of his clerk, glaring at me meanwhile with an expression which combined singularly the dissimilar effects of a gimlet and a plane. The rotund junior contented himself with glancing suspiciously at the order and sternly at me. As if reassured, however, by my plausible countenance, he flipped over the pages of a ledger, told me the number of my stateroom, and hunted up a packet of letters, which he delivered with an acid reproof to me for not having reported before, saying that the letters had been accumulating for ten days.

It is true that the Buford had been scheduled to sail on the first day of the month; but I had arrived a day or two before that date, only to learn that the sailing date had been postponed to the tenth. I had made many weary trips to the army headquarters in Montgomery Street, asking for mail—and labels—with no results. Nobody had suggested that the mail would be delivered aboard ship, and I had not had sense enough to guess it. I did not make any explanations to the quartermaster and his clerk, however, because an intuition warned me not to add tangible evidence to a general belief in civilian stupidity....