A Woman who went to Alaska

by May Kellogg Sullivan 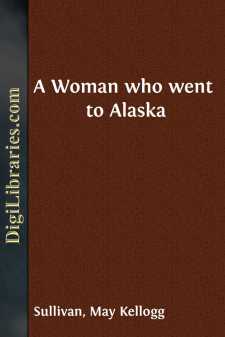 Y first trip from California to Alaska was made in the summer of 1899. I went alone to Dawson to my father and brother, surprising them greatly when I quietly walked up to shake hands with them at their work. The amazement of my father knew no bounds,—and yet I could see a lot of quiet amusement beneath all when he introduced me to his friends, which plainly said:

"Here is my venturesome daughter, who is really a 'chip off the old block,' so you must not be surprised at her coming to Alaska."

Father had gone to the Klondyke a year before at the age of sixty-four, climbing Chilkoot Pass in the primitive way and "running" Miles Canyon and White Horse Rapids in a small boat which came near being swamped in the passage.

My brother's entrance to the famous gold fields was made in the same dangerous manner a year before; but I had waited until trains over the White Pass and Yukon Railroad had been crossing the mountains daily for two weeks before myself attempting to get into Alaska's interior. At that time it was only a three hours' ride, including stops, over the Pass to Lake Bennett, the terminus of this new railroad, the first in Alaska. A couple of rude open flat cars with springless seats along the sides were all the accommodation we had as passengers from the summit of White Pass to Lake Bennett; we having paid handsomely for the privilege of riding in this manner and thinking ourselves fortunate, considering the fact that our route was, during the entire distance of about forty-five miles, strewn with the bleaching bones of earlier argonauts and their beasts of burden.

Naturally, my traveling companions interested me exceedingly. There were few women. Two ladies with their husbands were going to Dawson on business. About eight or ten other women belonging to the rapid class of individuals journeyed at the same time. We had all nationalities and classes. There were two women from Europe with luggage covered with foreign stickers, and a spoken jargon which was neither German nor French, but sounded like a clever admixture of both.

Then there was the woman who went by the name of Mrs. Somebody or other who wore a seal-skin coat, diamond earrings and silver-mounted umbrella. She had been placed in the same stateroom with me on the steamer at Seattle, and upon making her preparations to retire for the night had offered me a glass of brandy, while imbibing one herself, which I energetically, though politely, refused. At midnight a second woman of the same caste had been ushered into my room to occupy the third and last berth, whereupon next morning I had waited upon the purser of the ship, and modestly but firmly requested a change of location. In a gentlemanly way he informed me that the only vacant stateroom was a small one next the engine room below, but if I could endure the noise and wished to take it, I could do so. I preferred the proximity and whirr of machinery along with closer quarters to the company of the two adventuresses, so while both women slept late next morning I quietly and thankfully moved all my belongings below....