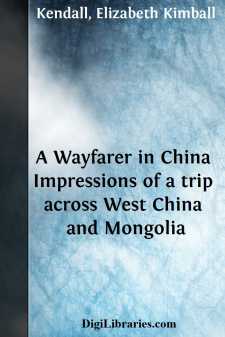 A word of explanation may help to an understanding of this record of a brief journey in China, in 1911, in the last quiet months before the revolution.

No one who has ever known the joy of hunting impressions of strange peoples and strange lands in the out-of-the-way corners of the world can ever feel quite free again, for he hears always a compelling voice that "calls him night and day" to go forth on the chase once more. Years ago, for a beginning, I pursued impressions and experiences in the Far West on the frontier,—there was a frontier then. And since that time, whenever chance has offered, that has been my holiday pastime, among the Kentucky mountains, in the Taurus, in Montenegro, in India. Everywhere there is interest, for everywhere there is human nature, but whoever has once come under the spell of the Orient knows that henceforth there is no choice; footloose, he must always turn eastwards.

But really to see the East one must shun the half-Europeanized town and the treaty port, must leave behind the comforts of hotel and railway, and be ready to accept the rough and the smooth of unbeaten trails. But the compensations are many: changing scenes, long days out of doors, freedom from the bondage of conventional life, and above all, the fascination of living among peoples of primitive simplicity and yet of a civilization so ancient that it makes all that is oldest in the West seem raw and crude and unfinished. So when two years ago my feet sought again the "open road," it was towards the East that I naturally turned, and this time it was China that called me. I did not go in pursuit of any information in particular, but just to get for myself an impression of the country and the people. My idea of the Chinese had been derived, like that of most Americans, from books and chance observation of the handful of Kwangtung men who are earning their living among us by washing our clothes. Silent, inscrutable, they flit through the American scene, alien to the last. What lies behind the riddle of their impassive faces? Perhaps I could find an answer. Then, too, it was clear, even to the most unintelligent, that a change was coming over the East, though few realized how speedily. I longed to see the old China before I made ready to welcome the new. But not the China of the coast, for there the West had already left its stamp. So I turned to the interior, to the western provinces of Yunnan and Szechuan. Wonderful for scenery, important in commerce and politics, still unspoiled, there I could find what I wanted.

Of course I was told not to do it, it would not be safe, but that is what one is always told. A long, solitary summer spent a few years ago among the Himalayas of Western Tibet, in Ladakh and Baltistan, gave me heart to face such discouragement, and I found, as I had found before, that those who knew the country best were most ready to speed me onward. And as the following pages show, there was nothing to fear. I had no difficulties, no adventures, hardly enough to make the tale interesting.

It is true, I had some special advantages. I was an American and a woman, and no longer young. Chinese respect for grey hair is a very real thing; a woman is not feared as a man may be, and hostility is often nothing more than fear; and even in remote Szechuan I met men who knew that the American Government had returned the Boxer indemnity, and who looked kindly upon me for that reason....