A Warwickshire Lad The Story of the Boyhood of William Shakespeare 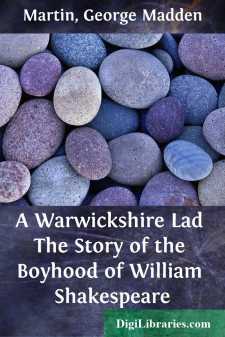 Little Will Shakespeare was going homeward through the dusk from Gammer Gurton's fireside. He had no timorous fears, not he. He would walk proudly and deliberately as becomes a man. Men are not afraid. Yet Gammer had told of strange happenings at her home. A magpie had flown screaming over the roof, the butter would not come in the churn, an' a strange cat had slipped out afore the maid at daybreak—a cat without a tail, Gammer said—

Little Will quickened his pace.

Dusk falls early these December days, and Willy Shakespeare scurrying along the street is only five, and although men are not afraid yet——

So presently when he pulls up he is panting, and he beats against the stubborn street door with little red fists, and falls in at its sudden opening, breathless.

But Mother's finger is on her lips as she looks up from her low chair in the living-room, for the whole world in this Henley Street household stands still and holds its breath when Baby Brother sleeps. Brought up short, Will tiptoes over to the chimney corner. Why will toes stump when one most wants to move noiselessly? He is panting still too with his hurrying and with all he has to tell.

"She says," begins Will before he has even reached Mother's side and his whisper is awesome, "Gammer says that Margery is more than any ailin', she is."

Now chimney corners may be wide and generous and cheerful with their blazing log, but they open into rooms which as night comes on grow big and shadowy, with flickers up against the raftered darkness of the ceilings. Little Will Shakespeare presses closer to his mother's side. "She says, Gammer does, she says that Margery is witched."

Mother at this speaks sharply. She is outdone about it. "A pretty tale for a child to be hearing," she says. "It is but a fearbabe. I wonder at Gammer, I do."

And turning aside from the cradle which she has been rocking, she lifts small Will to her lap, and he stretching frosty fingers and toes all tingling to the heat, snuggles close. He is glad Mother speaks sharply and is outdone about it; somehow this makes it more reassuring.

"Witched!" says Mother. "Tell me! 'Tis lingering in the lane after dark with that gawky country sweetheart has given her the fever that her betters have been having since the Avon come over bank. A wet autumn is more to be feared than Gammer's witches. Poor luck it is the lubberfolk aren't after the girl in truth; a slattern maid she is, her hearth unswept and house-door always open and the cream ever a-chill. The brownie-folk, I promise you, Will, pinch black and blue for less."

Mother is laughing at him. Little Will recognizes that and smiles back, but half-heartedly, for he is not through confessing.

"Wear what?" asks Mother, but even as she speaks must partly divine, for a finger and thumb go searching down between his little nape and the collar of his doublet, and in a moment they draw it forth, a bit of witches' elm.

"Gammer, she sewed it there," says Will.

A little frown was gathering between Mother's brows, which was making small Willy Shakespeare feel still more reassured and comfortable, when suddenly she gave a cry and start, half rising, so that he, startled too, slid perforce to the floor, clinging to her gown.

Whereupon Mother sank back in her chair, her hand pressed against the kerchief crossed over her bosom, and laughed shamefacedly, for it had been nothing more terrible that had startled her than big, purring Graymalkin, the cat, insinuating his sleek back under her hand as he arched and rubbed about her chair....