A Ward of the Golden Gate 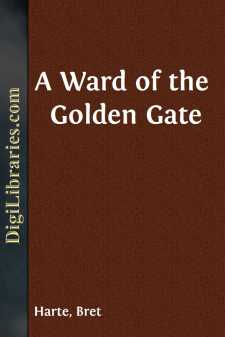 In San Francisco the "rainy season" had been making itself a reality to the wondering Eastern immigrant. There were short days of drifting clouds and flying sunshine, and long succeeding nights of incessant downpour, when the rain rattled on the thin shingles or drummed on the resounding zinc of pioneer roofs. The shifting sand-dunes on the outskirts were beaten motionless and sodden by the onslaught of consecutive storms; the southeast trades brought the saline breath of the outlying Pacific even to the busy haunts of Commercial and Kearney streets; the low-lying Mission road was a quagmire; along the City Front, despite of piles and pier and wharf, the Pacific tides still asserted themselves in mud and ooze as far as Sansome Street; the wooden sidewalks of Clay and Montgomery streets were mere floating bridges or buoyant pontoons superposed on elastic bogs; Battery Street was the Silurian beach of that early period on which tin cans, packing-boxes, freight, household furniture, and even the runaway crews of deserted ships had been cast away. There were dangerous and unknown depths in Montgomery Street and on the Plaza, and the wheels of a passing carriage hopelessly mired had to be lifted by the volunteer hands of a half dozen high-booted wayfarers, whose wearers were sufficiently content to believe that a woman, a child, or an invalid was behind its closed windows, without troubling themselves or the occupant by looking through the glass.

It was a carriage that, thus released, eventually drew up before the superior public edifice known as the City Hall. From it a woman, closely veiled, alighted, and quickly entered the building. A few passers-by turned to look at her, partly from the rarity of the female figure at that period, and partly from the greater rarity of its being well formed and even ladylike.

As she kept her way along the corridor and ascended an iron staircase, she was passed by others more preoccupied in business at the various public offices. One of these visitors, however, stopped as if struck by some fancied resemblance in her appearance, turned, and followed her. But when she halted before a door marked "Mayor's Office," he paused also, and, with a look of half humorous bewilderment and a slight glance around him as if seeking for some one to whom to impart his arch fancy, he turned away. The woman then entered a large anteroom with a certain quick feminine gesture of relief, and, finding it empty of other callers, summoned the porter, and asked him some question in a voice so suppressed by the official severity of the apartment as to be hardly audible. The attendant replied by entering another room marked "Mayor's Secretary," and reappeared with a stripling of seventeen or eighteen, whose singularly bright eyes were all that was youthful in his composed features. After a slight scrutiny of the woman—half boyish, half official—he desired her to be seated, with a certain exaggerated gravity as if he was over-acting a grown-up part, and, taking a card from her, reentered his office....