A Wanderer in Florence 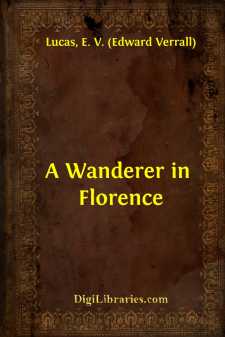 The Duomo I: Its Construction

All visitors to Florence make first for the Duomo. Let us do the same.

The real name of the Duomo is the Cathedral of S. Maria del Fiore, or St. Mary of the Flowers, the flower being the Florentine lily. Florence herself is called the City of Flowers, and that, in the spring and summer, is a happy enough description. But in the winter it fails. A name appropriate to all the seasons would be the City of the Miracle, the miracle being the Renaissance. For though all over Italy traces of the miracle are apparent, Florence was its very home and still can point to the greatest number of its achievements. Giotto (at the beginning of this quickening movement) may at Assisi have been more inspired as a painter; but here is his campanile and here are his S. Maria Novella and S. Croce frescoes. Fra Angelico and Donatello (in the midst of it) were never more inspired than here, where they worked and died. Michelangelo (at the end of it) may be more surprising in the Vatican; but here are his wonderful Medici tombs. How it came about that between the years 1300 and 1500 Italian soil—and chiefly Tuscan soil—threw up such masters, not only with the will and spirit to do what they did but with the power too, no one will ever be able to explain. But there it is. In the history of the world two centuries were suddenly given mysteriously to the activities of Italian men of humane genius and as suddenly the Divine gift was withdrawn. And to see the very flower of these two centuries it is to Florence we must go.

It is best to enter the Piazza del Duomo from the Via de' Martelli, the Via de' Cerretani, the Via Calzaioli, or the Via Pecori, because then one comes instantly upon the campanile too. The upper windows—so very lovely—may have been visible at the end of the streets, with Brunelleschi's warm dome high in the sky beside them, but that was not to diminish the effect of the first sight of the whole. Duomo and campanile make as fair a couple as ever builders brought together: the immense comfortable church so solidly set upon the earth, and at its side this delicate, slender marble creature, all gaiety and lightness, which as surely springs from roots within the earth. For one cannot be long in Florence, looking at this tower every day and many times a day, both from near and far, without being perfectly certain that it grows—and from a bulb, I think—and was never really built at all, whatever the records may aver.

The interior of the Duomo is so unexpected that one has the feeling of having entered, by some extraordinary chance, the wrong building. Outside it was so garish with its coloured marbles, under the southern sky; outside, too, one's ears were filled with all the shattering noises in which Florence is an adept; and then, one step, and behold nothing but vast and silent gloom....