A Waif of the Mountains 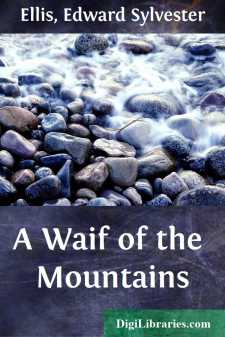 IT had been snowing hard for twenty-four hours at Dead Man’s Gulch. Beginning with a few feathery particles, they had steadily increased in number until the biting air was filled with billions of snowflakes, which whirled and eddied in the gale that howled through the gorges and cañons of the Sierras. It was still snowing with no sign of cessation, and the blizzard blanketed the earth to the depth of several feet, filling up the treacherous hollows, caverns and abysses and making travel almost impossible for man or animal.

The shanties of the miners in Dead Man’s Gulch were just eleven in number. They were strung along the eastern side of the gorge and at an altitude of two or three hundred feet from the bed of the pass or cañon. The site protruded in the form of a table-land, offering a secure foundation for the structures, which were thus elevated sufficiently to be beyond reach of the terrific torrents that sometimes rushed through the ravine during the melting of the snow in the spring, or after one of those fierce cloud-bursts that give scarcely a minute’s warning of their coming.

The diggings were in the mountain side at varying distances. The success in mining had been only moderate, although several promising finds raised hopes. The population numbered precisely thirty men, representing all quarters of the Union, while five came from Europe. The majority were shaggy, bronzed adventurers, the variety being almost as great as the numbers. Some had been clerks, several were college graduates, a number were the sons of wealthy parents, and one was a full-fledged parson, while there was a certain percentage who had left their homes to escape the grip of the offended law.

With that yearning for picturesqueness which is a peculiar trait of Americans, the miners felt that when their settlement had attained the dignity of nearly a dozen dwellings, it was entitled to an appropriate name. The gorge, which seemed to have been gouged out of the solid mass of boulders and rocks, when the mountains were split apart in the remote past, was known from the first by the title already given, which also clung to the diggings themselves.

The single saloon presided over by Max Ortigies, was the Heavenly Bower,––so that point was settled, but when it came to naming the settlement itself, the difficulties were so numerous that days and weeks passed without an agreement being reached. No matter how striking and expressive the title offered by one man, the majority promptly protested. It was too sulphurous, or too insipid or it lacked in that nebulous characteristic which may be defined as true Americanism. It looked as if the problem would never be solved, when Landlord Ortigies, taking the bull by the horns, appointed a committee of three to select a name, the others pledging themselves to accept whatever the committee submitted.

But the mischief was to pay when on the night of the blizzard the committee met at the Heavenly Bower to make their report....