A Voyage with Captain Dynamite 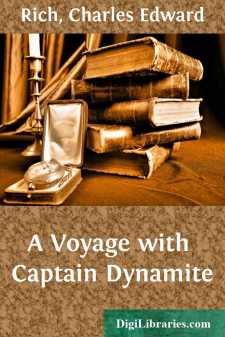 CHAPTER I Caught in a Gale

"Let go the jib halliards, Mason. Lay out there, Bert, and get in that slack sail. It's blowing a bit. Gee, see that bank of wind coming up."

The little pleasure boat careened and took aboard a few barrels of water as she faced a sudden puff of wind that almost put her on her beam ends. But she was a game little craft, and came back from the onslaught of the elements with a sturdiness that indicated strong timbers, and a build that was meant to cope with the sudden squalls that come out of a clear sky off the coast of Martha's Vineyard during the early autumn days.

"She's good for anything that you will get around these parts, and she is the fastest boat of her length in these waters."

This recommendation by Tom, the veteran skipper of the summer fleet, had been sufficient to complete the sale of the sloop to three enthusiastic boys. And the boat had made good her reputation and served her purpose well. During the two months that the boys had owned her, there had been few days when she had not been in commission, either cruising for blue fish, or skimming along the shores of the island in a pleasant, summer way, lazily passing the days away for the youngsters, who lolled contentedly on her deck.

Since we shall follow the crew of the yacht through many adventures, let us make their acquaintance at once. At the helm stood Harry Hamilton, a boy of sixteen, strong of build and an athlete of renown within the circles of his school. Honest and straightforward in all his dealings, and with a cheery disposition, he commanded the respect and admiration of his fellows, and because of his natural characteristics, was usually looked upon as the leader in their sports. With his parents he was spending his vacation at their summer home at Cottage City.

With him were two schoolmates, Geoffrey Mason and Bertram Wilson, who were staying with him. Bertram was about Harry's age. Geoffrey, nicknamed "Midget" Mason, or the "Midget," was a year younger than his chums, and although small for his age, was strong and wiry. Light hearted and fun loving, he was always the life of any gathering of boys. He was one of Harry Hamilton's staunchest friends and admirers. For weeks the boys had enjoyed the sailing, bathing, fishing, golf, and other sports, but their particular diversion was sailing. Under the instruction of old Tom, the boys were soon able to handle alone the little boat that they had bought by clubbing together their resources.

"Don't worry, mother, she's as safe as a scow," Harry would say, as he saw the expression of anxiety spread over his mother's face when he announced that they were off for a day's cruising.

On this day they had started early in the morning for a blue-fishing cruise, and all had gone well until the homeward voyage. The cockpit was full of big fish and the boys took much pleasure in anticipating their reception when they made fast to the pier. The little sloop was skimming along under full sail, when just off Edgartown a stiff puff of wind struck them.

Harry jammed the helm hard down and the boat responded gamely, coming quickly up into the wind. It was then that he called sharply to Mason to let go the jib halliards. The sail was so light and the wind slapped it from side to side with such angry vehemence that it would not run down on the stay. Harry dropped the helm, and holding it down with the pressure of his leg, seized the down haul and brought the jib, flapping and pounding, down to the bowsprit.

"Get out there and furl that jib, Bert," he shouted. "We'll have to reef down the mainsail soon."

Bert climbed cautiously out of the cockpit and made his way along the slippery deck until he reached the bowsprit. Clinging to the mainmast, he steadied himself while he surveyed the thrashing sail, whose folds of canvas hung over and trailed in the water until, caught every now and then by the wind, it bellied out like a balloon. A wave bigger than the rest completely submerged the bowsprit as the boat plunged into the trough of the sea....