A Voyage Towards the South Pole and Round the World, Volume 1 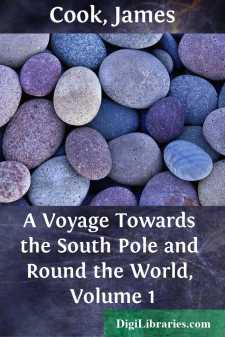 Whether the unexplored part of the Southern Hemisphere be only an immense mass of water, or contain another continent, as speculative geography seemed to suggest, was a question which had long engaged the attention, not only of learned men, but of most of the maritime powers of Europe.

To put an end to all diversity of opinion about a matter so curious and important, was his majesty's principal motive in directing this voyage to be undertaken, the history of which is now submitted to the public.

But, in order to give the reader a clear idea of what has been done in it, and to enable him to judge more accurately, how far the great object that was proposed, has been obtained, it will be necessary to prefix a short account of the several voyages which have been made on discoveries to the Southern Hemisphere, prior to that which I had lately the honour to conduct, and which I am now going to relate.

The first who crossed the vast Pacific Ocean, was Ferdinand Magalhaens, a Portuguese, who, in the service of Spain, sailed from Seville, with five ships, on the 10th of April, 1519. He discovered the straits which bear his name; and having passed through them, on the 27th of November, 1520, entered the South Pacific Ocean.

In this sea he discovered two uninhabited islands, whose situations are not well known. He afterwards crossed the Line; discovered the Ladrone Islands; and then proceeded to the Phillipines, in one of which he was killed in a skirmish with the natives.

His ship, called the Victory, was the first that circumnavigated the globe; and the only one of his squadron that surmounted the dangers and distresses which attended this heroic enterprise.

The Spaniards, after Magalhaens had shewed them the way, made several voyages from America to the westward, previous to that of Alvaro Mendana De Neyra, in 1595, which is the first that can be traced step by step. For the antecedent expeditions are not handed down to us with much precision.

We know, however, in general, that, in them, New Guinea, the islands calledSolomon's, and several others, were discovered.

Geographers differ greatly concerning the situation of the Solomon Islands. The most probable opinion is, that they are the cluster which comprises what has since been called New Britain, New Ireland, &c.

On the 9th of April, 1595, Mendana, with intention to settle these islands, sailed from Callao, with four ships; and his discoveries in his route to the west, were the Marquesas, in the latitude of 10° S.; the island of St Bernardo, which I take to be the same that Commodore Byron calls the Island of Danger; after that, Solitary Island, in the latitude of 10° 40' S., longitude 178° W.; and, lastly, Santa Cruz, which is undoubtedly the same that Captain Carteret calls Egmont Island.

In this last island, Mendana, with many of his companions, died; and the shattered remains of the squadron were conducted to Manilla, by Pedro Fernandes de Quiros, the chief pilot....