A Voyage to Terra Australis - Volume 2 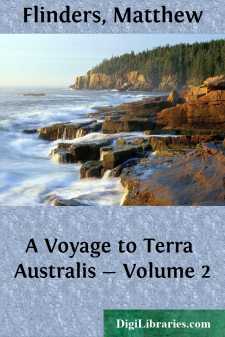 Lieutenant John Murray, commander of the brig Lady Nelson, having received orders to put himself under my command, I gave him a small code of signals, and directed him, in case of separation, to repair to Hervey's Bay; which he was to enter by a passage said to have been found by the south-sea whalers, between Sandy Cape and Break-sea Spit. In the morning of July 22, we sailed out of Port Jackson together; and the breeze being fair and fresh, ran rapidly to the northward, keeping at a little distance from the coast. (Atlas, Plate VIII.)

At eleven o'clock, the south head of Broken Bay bore W. by N. three leagues; and Mr. Westall then made a sketch of the entrance, with that of the Hawkesbury River, which falls into it (Atlas, Plate XVIII, View 2). The colonists have called this place Broken Bay, but it is not what was so named by captain Cook; for he says it lies in latitude 33° 42' (Hawkesworth III. 103), whereas the southernmost point of entrance is not further than 33° 34' south. There is, in captain Cook's latitude, a very small opening, and the hills behind it answer to his description of "some broken land that seemed to form a bay," when seen at four leagues, the distance he was off; but in reality, there is nothing more than a shallow lagoon in that place. In consequence of this difference in position, Cape Three-points has been sought three or four leagues to the north of Broken Bay; whereas it is the north head of the entrance into the bay itself which was so named, and it corresponds both in situation and appearance.

We passed Port Stephens a little before midnight; and the breeze being fresh at W. by S., the Lady Nelson was left astern, and we lay to for an hour next morning [FRIDAY 23 JULY 1802], to wait her coming up. The land was then scarcely visible, but a north course brought us in with the Three Brothers (Atlas Plate IX.); and at four in the afternoon, they bore from S....