A Voice in the Wilderness 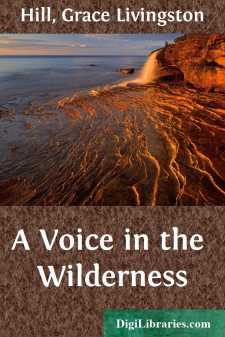 With a lurch the train came to a dead stop and Margaret Earle, hastily gathering up her belongings, hurried down the aisle and got out into the night.

It occurred to her, as she swung her heavy suit-case down the rather long step to the ground, and then carefully swung herself after it, that it was strange that neither conductor, brakeman, nor porter had come to help her off the train, when all three had taken the trouble to tell her that hers was the next station; but she could hear voices up ahead. Perhaps something was the matter with the engine that detained them and they had forgotten her for the moment.

The ground was rough where she stood, and there seemed no sign of a platform. Did they not have platforms in this wild Western land, or was the train so long that her car had stopped before reaching it?

She strained her eyes into the darkness, and tried to make out things from the two or three specks of light that danced about like fireflies in the distance. She could dimly see moving figures away up near the engine, and each one evidently carried a lantern. The train was tremendously long. A sudden feeling of isolation took possession of her. Perhaps she ought not to have got out until some one came to help her. Perhaps the train had not pulled into the station yet and she ought to get back on it and wait. Yet if the train started before she found the conductor she might be carried on somewhere and be justly blame her for a fool.

There did not seem to be any building on that side of the track. It was probably on the other, but she was standing too near the cars to see over. She tried to move back to look, but the ground sloped and she slipped and fell in the cinders, bruising her knee and cutting her wrist.

In sudden panic she arose. She would get back into the train, no matter what the consequences. They had no right to put her out here, away off from the station, at night, in a strange country. If the train started before she could find the conductor she would tell him that he must back it up again and let her off. He certainly could not expect her to get out like this.

She lifted the heavy suit-case up the high step that was even farther from the ground than it had been when she came down, because her fall had loosened some of the earth and caused it to slide away from the track. Then, reaching to the rail of the step, she tried to pull herself up, but as she did so the engine gave a long snort and the whole train, as if it were in league against her, lurched forward crazily, shaking off her hold. She slipped to her knees again, the suit-case, toppled from the lower step, descending upon her, and together they slid and rolled down the short bank, while the train, like an irresponsible nurse who had slapped her charge and left it to its fate, ran giddily off into the night.

The horror of being deserted helped the girl to rise in spite of bruises and shock. She lifted imploring hands to the unresponsive cars as they hurried by her—one, two, three, with bright windows, each showing a passenger, comfortable and safe inside, unconscious of her need....