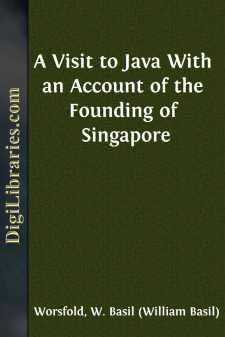 In the centre of that region of countless islands termed not inaptly the "Summer of the World," midmost of the Sunda group of which Sumatra lies to the west, and Flores to the east, with the fury of the tropical sun tempered by a physical formation which especially exposes it to the cooling influence of the ocean, lies the island of Java. Rich in historic remains of a bygone Hindu supremacy, when the mild countenance of Buddha gazed upon obedient multitudes, in memorials of Mohammedan, Portuguese, and Dutch seafaring enterprises, it is a country singularly alluring to the student and antiquarian. Nor is its present life less interesting. Densely populated by a simple and refined native race, who live for the most part in the midst of mountain glories and tropical verdure, itself the best example of a rival and successful system of colonization, modern Java is no mere tourist's country, but one which possesses, and always has possessed, special attractions for the man of science and the political student.

From an immense mass of native tradition the main outlines of the history of the island can be disentangled with sufficient certainty.

Javanese tradition universally speaks of a personage called Saka, variously termed warrior, priest, and god, to whom is attributed the introduction of the arts of civilization, and whose advent marks the opening year of the native chronology. The first year of Saka corresponds to the seventy-eighth of the Christian era. There can be no doubt as to the region from which this extraneous civilization came. Native tradition and the vast religious monuments of the eastern and central districts alike point to an Indian colonization and supremacy; for the temples of Java bear the stamp of a culture and of an artistic and architectural genius superior to that possessed by a race, the sole record of whose national existence is contained in the meagre tradition of an immigration from the western lands about the Red Sea.

Sir Stamford Raffles, in his exhaustive history of Java, gives the names and dates of the Hindu monarchs, with an account of their conquests and administrations. But the native chronicles require to be carefully sifted, and to be supported by the record of the antiquarian remains, which supply an unfailing basis for, at any rate, the main outlines of the period. The oldest inscriptions are found on the west side of Buitenzorg, on river stones, and at Bekasi, on the east side of Batavia; they are written in Sanskrit characters of the oldest period, and, by comparison with the inscriptions of British India, indicate the existence of Hindu civilization in Java during the fourth and fifth centuries after Christ. The oldest dated inscription in Java (and in the Archipelago) is one bearing date 654 of Saka (A.D. 732). This is now in the museum at Batavia. It contains twelve verses in the Sanskrit tongue, and is about four feet in length by two in width, and about ten inches in depth.

The magnificent temple of Boro-Boedoer, of which Mr. Wallace says, "The amount of human labour and skill expended on the Great Pyramid of Egypt sinks into insignificance when compared with that required to complete this sculptured hill temple in the interior of Java," and which will be separately described with the other religious monuments, was probably erected in the eighth or ninth century. It marks the highest point in the Hindu supremacy, and the time when the influence of Buddhism was supreme. At any rate, we have the witness of Fa Hian, a Chinese traveller, who visited the island in the fifteenth century, to the effect that at this later period "the Brahmins were still very numerous, but the law of Buddha was no longer respected."

The earliest European visitors tell us nothing of the two Hindu kingdoms, Pajajaran and Majapahit, so celebrated in the chronicles....