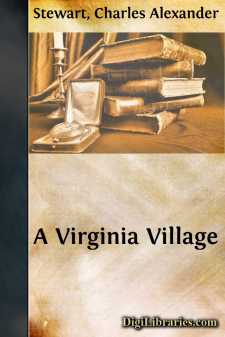 Charles A. Stewart's A Virginia Village is a charming depiction of the early days of Falls Church. It is the earliest attempt to put on paper the story of the Falls Church area. In addition to interesting stories about people and organizations and life generally in the small town of 80 years ago, the book contains photographs of 107 Falls Church houses, stores, and churches then standing. Reading it is a trip into nostalgia for old-timers—but the book is more than nostalgia. It pictures many elements which we associate with the community's lovely historic character and interest, and which intrigues newcomers and older residents alike.

Charles A. Stewart produced the book with the help of friends, including M. M. Ogden, who wrote the preface, and Pickering Dodge, who took the photographs. Joseph H. Newell printed it in a small backyard shop owned by his father, which was located on what is today North Washington Street next to the Columbia Baptist Church.

Not all of the structures standing in the town of Falls Church in 1904 are pictured in A Virginia Village. Some owners perhaps were not asked, or they did not wish to pay the two-dollar fee, or they declined for other reasons. A number of these absent structures were well-known features of the community, including the two W.&O.D. railway stations (East and West Falls Church, now gone), Mt. Hope, Shadow Lawn (or Whitehall), Tallwood, Jefferson School (no longer standing) and the old I.O.O.F. Hall (also gone). Falls Church—By Fence and Fireside, published in 1964 by the Rev. Melvin Steadman, mentions many others, such as Big Chimneys, which was still standing in 1904.

Of the 107 structures pictured, 24 were located near the present City, particularly in what was then known as the "East End" or East Falls Church. This former part of the town of Falls Church was returned to Alexandria County (now Arlington) in 1936. A large number of homes, stores, and other business establishments which constituted East Falls Church disappeared with the building of I-66, especially that part of the highway that lies between Westmoreland and Sycamore Streets in Arlington County. East Falls Church extended from the present City/County line down Lee Highway, and thus was located on both the north and south sides of I-66.

While the City has lost much of its rural village character and charm, and has meanwhile acquired some ugly modernity in spots, the City's preservation ordinance, adopted in 1984, throws a protective cloak against further demolition around structures built as residences prior to 1911. Other buildings, such as churches and historic sites, are also protected by the ordinance, subject to certification by the Historical Commission to a Register. In addition, the Falls Church Village Preservation and Improvement Society and others continually seek ways to restore what aesthetic features have been lost.

Much additional information about houses, people and events in and around Falls Church will be found in the publications mentioned above and in other publications and documents making up the Falls Church Local Historical Collection in the Virginia Room of the Mary Riley Styles Public Library. The Collection is a veritable treasure-house of historical information waiting to be explored, and anyone looking for more information concerning any of the persons or places mentioned in this book is urged to consult the Collection in the Virginia Room.

Charles Alexander Stewart (1860-1950), who is best remembered in Falls Church for his estimable little book, A Virginia Village, which was published in 1904, was born at "Beechwood," the Stewart family farm at the intersection of the Dismal Swamp and Northwest Canals. He was the fourth in a family of five. His father, William Charles Stewart (1810-1865), died at "Beechwood."

Mr. Stewart had a distinguished career in the United States Treasury Department where he became chief clerk in the Office of the Comptroller of the Currency, and was a bank examiner when he retired in 1930. He was active in many community affairs. He was a vestryman of The Falls Church, was chairman of the Falls Church School Board continuously from 1910 to 1927, was active in the creation of Madison School and, while he was still living, the Charles A....