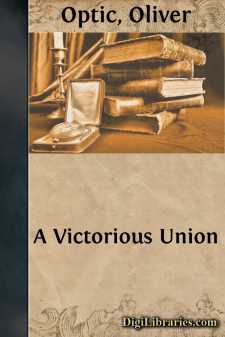 CHAPTER I THE MISSION TO MOBILE POINT

"I almost wish you were the second or the third lieutenant of the Bellevite, instead of the executive officer, Christy," said Captain Breaker, the commander of the steamer, as they were seated together one day on the quarter-deck.

"Do I fail in the discharge of my duty in my present position, Captain?" asked Christy, very much astonished, not to say startled, at the remark of the commander.

"Not in the slightest degree, my dear boy!" returned Captain Breaker with very decided emphasis. "You have served in your present capacity for four months; and if you were fifty years old, and had twenty years of naval experience behind you, it would be hardly possible for you to be more correct and dignified in the performance of the details of your office."

"I thank you, Captain, for the partial view you take of what I have done," added Christy, taking off his cap and bowing to his superior.

"Well, you ought to be a good officer in any situation, my dear fellow," continued the commander. "I doubt if there is another officer in the navy who has enjoyed the advantages you have had in preparing himself for the duties of his profession. You were brought up, so to say, on board of the Bellevite. You were a good scholar in the first place. Without including myself, you have had excellent teachers in every department of science and philosophy, among whom your father was one of the wisest. Poor Dashington was one of the best seamen that ever trod a deck; and he took especial delight in showing you how to make every knot and splice, as well as in instructing you in the higher details of practical seamanship. Blowitt and myself assisted him, and old Boxie, who gave his life to his country, was more than a grandfather to you."

"I have certainly been very grateful to you and to them for all they did for me," replied Christy with a sad expression on his handsome face as the commander recalled the three shipmates of both of them who slept in heroes' graves.

"Perhaps the brilliant genius of our engine-room did quite as much for you as any other person, though not many years your senior."

"Paul Vapoor is my friend and crony; and if he had been my professor in a college he could have done no more for me. I assure you, Captain, that I keep alive my gratitude to all my instructors, including some you have not mentioned."

"I was only explaining why you are what you ought to be, for you have had very exceptional opportunities, better by far than any other officer in the service. But it is altogether to your credit that you have used those opportunities wisely and well."

"I should have been a blockhead if I had not."

"That is very true; but the mournful wrecks of wasted opportunities strew the tracks of many, many young men. I think you can look back upon as few of them as any one within my knowledge," said the commander, bestowing a look of genuine affection upon his chief officer. "More than once, even before we entered upon this terrible war, I have told your father how happy he ought to be in having such a son as you are."