A Treatise on the Six-Nation Indians

by J. B. (James Bovell) Mackenzie 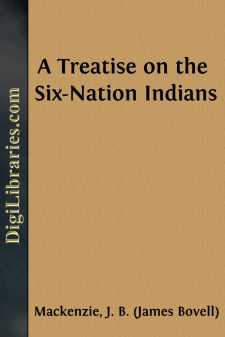 The conditions which govern the Indian's occupation of his Reserve are, probably, so well known, that any extended reference under this head will be needless.

He ceded the whole of his land to the Government, this comprising, originally, a tract which pursued the entire length of the Grand River, and, accepting it as the radiating point, extended up from either side of the river for a distance of six miles, to embrace an area of that extent. The Government required the proprietary right to the land, in the event of their either desiring to maintain public highways through it themselves, or that they might be in a position to sanction, or acquiesce in, its use or expropriation by Railway Corporations, for the running of their roads; or for other national or general purposes. The surrender on the part of the Indian was not, however, an absolute one, there having been a reservation that he should have a Reservation, of adequate extent, and the fruit of the tilling of which he should enjoy as an inviolable privilege.

As regards the money-consideration for this land, the Government stand to the Indian in the relation of Trustees, accounting for, and apportioning to, him, through the agency of their officer and appointee, the Indian Superintendent, at so much per capita of the population, the interest arising out of the investment of such money.

Sales of lands among themselves are permissible; but these, for the most part, narrow themselves down to cases where an Indian, with the possession of a good lot, of fair extent, and with a reasonable clearing, vested in him, leaves it, to pursue some calling, or follow some trade, amongst the whites; and treats, perhaps, with some younger Indian, who, disliking the pioneer work involved in taking up some uncultured place for himself, and preferring to make settlement on the comparatively well cultivated lot, buys it. The Government, also, allow the Indian, though as a matter of sufferance, or, in other words, without bringing the law to bear upon him for putting in practice what is, strictly speaking, illegal, to rent to a white the lot or lots on which he may be located, and to receive the rent, without sacrifice or alienation of his interest-money.

Continued non-residence entails upon the non-resident the forfeiture of his interest.

The Indian is, of course, a minor in the eye of the law, a feature of his estate, with the disabilities it involves, I shall dwell upon more fully at a later stage.

Should the Indian intermarry with a white woman, the receipt of his interest-allowance is not affected or disturbed thereby, the wife coming in, as well, for the benefits of its bestowal; but should, on the other hand, an Indian woman intermarry with a white man, such act compels, as to herself, acceptance, in a capitalized sum, of her annuities for a term of ten years, with their cessation thereafter; and entails upon the possible issue of the union absolute forfeiture of interest-money. In any connection of the kind, however, that may be entered into, the Indian woman is usually sage and provident enough to marry one, whose hold upon worldly substance will secure her the domestic ease and comforts, of which the non-receipt of her interest would tend to deprive her....