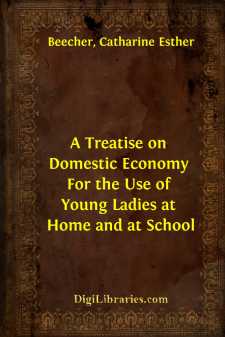 THE PECULIAR RESPONSIBILITIES OF AMERICAN WOMEN.

There are some reasons, why American women should feel an interest in the support of the democratic institutions of their Country, which it is important that they should consider. The great maxim, which is the basis of all our civil and political institutions, is, that "all men are created equal," and that they are equally entitled to "life, liberty, and the pursuit of happiness."

But it can readily be seen, that this is only another mode of expressing the fundamental principle which the Great Ruler of the Universe has established, as the law of His eternal government. "Thou shalt love thy neighbor as thyself;" and "Whatsoever ye would that men should do to you, do ye even so to them," are the Scripture forms, by which the Supreme Lawgiver requires that each individual of our race shall regard the happiness of others, as of the same value as his own; and which forbid any institution, in private or civil life, which secures advantages to one class, by sacrificing the interests of another.

But, in order that each individual may pursue and secure the highest degree of happiness within his reach, unimpeded by the selfish interests of others, a system of laws must be established, which sustain certain relations and dependencies in social and civil life. What these relations and their attending obligations shall be, are to be determined, not with reference to the wishes and interests of a few, but solely with reference to the general good of all; so that each individual shall have his own interest, as well as the public benefit, secured by them.

For this purpose, it is needful that certain relations be sustained, which involve the duties of subordination. There must be the magistrate and the subject, one of whom is the superior, and the other the inferior. There must be the relations of husband and wife, parent and child, teacher and pupil, employer and employed, each involving the relative duties of subordination. The superior, in certain particulars, is to direct, and the inferior is to yield obedience. Society could never go forward, harmoniously, nor could any craft or profession be successfully pursued, unless these superior and subordinate relations be instituted and sustained.

But who shall take the higher, and who the subordinate, stations in social and civil life? This matter, in the case of parents and children, is decided by the Creator. He has given children to the control of parents, as their superiors, and to them they remain subordinate, to a certain age, or so long as they are members of their household. And parents can delegate such a portion of their authority to teachers and employers, as the interests of their children require.

In most other cases, in a truly democratic state, each individual is allowed to choose for himself, who shall take the position of his superior. No woman is forced to obey any husband but the one she chooses for herself; nor is she obliged to take a husband, if she prefers to remain single....