A Treatise of Witchcraft 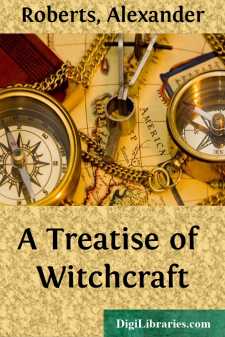 A TREATISE OF THECONFESSION AND EXECVTION OF MARY SMITH,CONVICTED OF WITCHCRAFT, and condemned for the same: of her contract vo-cally & in solemne tearmes made with the Diuell;by whose meanes she hurt sundry persons whom she enuied, with some necessary Propositions addedthereunto, discouering the wickednesse of that dam-nable Art, and diuers other speciall poynts, notimpertinent vnto the same, such as oughtdiligently of euery Christian tobee considered.

THere is some diuersitie of iudgement among the learned, who should be the first Author and Inuenter of Magicall and curious Arts. The most generall occurrence of opinion is, that they fetch their pedigree from the Persians, who searching more deeply into the secrets of Nature then others, and not contented to bound themselues within the limits thereof, fell foule of the Diuell, and were insnared in his nets.

And among these, the publisher vnto the world was Zoroaster, who so soone as he by birth entred the world, contrary to the vsuall condition of other men, laughed (whereas the beginning of our life is a sob, the end a sigh) and this was ominous to himselfe, no warrantise for the enioying of the pleasures of this life, ouercome in battell by Ninus King of the Assirians, and ending his dayes by the stroake of a thunder-bolt, and could not, though a famous Sorcerer, either fore-see, or preuent his owne destinie. And because he writ many bookes of this damnable Art, and left them to posterity, may well be accounted a chiefe maister of the same. But the Diuell must haue the precedencie, whose schollers both he and the rest were, who followed treading in his steps. For he taught them South-saying, Auguration, Necromancie, and the rest, meere delusions, aiming therein at no other marke, then to with draw men from the true worshipping of God. And all these pernitious practises are fast tied together by the tailes, though their faces looke sundry wayes; and therefore the Professors thereof are stiled by sundry names, as Magitians, Necromancers, Inchanters, Wisards, Hagges, Fortune-tellers, Diuiners, Witches, Cunning Men, and Women, &c. Whose Art is such a hidden mystery of wickednesse, and so vnsearchable a depth of Sathan, that neither the secrets of the one can be discouered, nor the bottome of the other further sounded, then either the practisers thereof themselues by their owne voluntary confessions made, or procured by order of Iustice (according to the manner of that Countrey where they be questioned) haue acknowledged, or is manifested by the sundry mischiefes done of them vnto others, proued by impartiall testimonies vpon oath, and by vehement presumptions confirmed, or else communicated vnto vs in the learned Treatises, and discourses of ancient and late Writers gathered from the same grounds. And although this Hellish Art be not now so frequent as heretofore, since the Pagans haue beene conuerted vnto Christianity, and the thick fogges of Popery ouer-mantling the bright shining beames of the Gospel of Iesus Christ (who came to dissolue the workes of the Diuell .1....