A Treatise Concerning the Principles of Human Knowledge 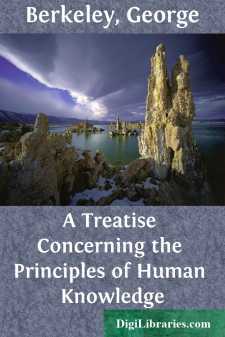 What I here make public has, after a long and scrupulous inquiry, seemed to me evidently true and not unuseful to be known--particularly to those who are tainted with Scepticism, or want a demonstration of the existence and immateriality of God, or the natural immortality of the soul. Whether it be so or no I am content the reader should impartially examine; since I do not think myself any farther concerned for the success of what I have written than as it is agreeable to truth. But, to the end this may not suffer, I make it my request that the reader suspend his judgment till he has once at least read the whole through with that degree of attention and thought which the subject-matter shall seem to deserve. For, as there are some passages that, taken by themselves, are very liable (nor could it be remedied) to gross misinterpretation, and to be charged with most absurd consequences, which, nevertheless, upon an entire perusal will appear not to follow from them; so likewise, though the whole should be read over, yet, if this be done transiently, it is very probable my sense may be mistaken; but to a thinking reader, I flatter myself it will be throughout clear and obvious. As for the characters of novelty and singularity which some of the following notions may seem to bear, it is, I hope, needless to make any apology on that account. He must surely be either very weak, or very little acquainted with the sciences, who shall reject a truth that is capable of demonstration, for no other reason but because it is newly known, and contrary to the prejudices of mankind. Thus much I thought fit to premise, in order to prevent, if possible, the hasty censures of a sort of men who are too apt to condemn an opinion before they rightly comprehend it.

1. Philosophy being nothing else but THE STUDY OF WISDOM AND TRUTH, it may with reason be expected that those who have spent most time and pains in it should enjoy a greater calm and serenity of mind, a greater clearness and evidence of knowledge, and be less disturbed with doubts and difficulties than other men. Yet so it is, we see the illiterate bulk of mankind that walk the high-road of plain common sense, and are governed by the dictates of nature, for the most part easy and undisturbed. To them nothing THAT IS FAMILIAR appears unaccountable or difficult to comprehend. They complain not of any want of evidence in their senses, and are out of all danger of becoming SCEPTICS. But no sooner do we depart from sense and instinct to follow the light of a superior principle, to reason, meditate, and reflect on the nature of things, but a thousand scruples spring up in our minds concerning those things which before we seemed fully to comprehend. Prejudices and errors of sense do from all parts discover themselves to our view; and, endeavouring to correct these by reason, we are insensibly drawn into uncouth paradoxes, difficulties, and inconsistencies, which multiply and grow upon us as we advance in speculation, till at length, having wandered through many intricate mazes, we find ourselves just where we were, or, which is worse, sit down in a forlorn Scepticism....