A Tour of the Missions Observations and Conclusions 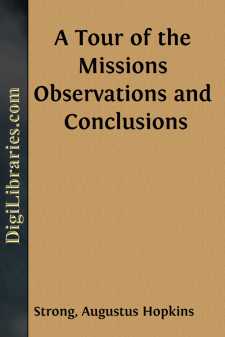 The Pacific Ocean was very kind to us, for it answered to its name, and was pacific beyond all our expectations. Sixteen days of smooth seas and lovely weather brought us by way of Honolulu to Yokohama. Only the last day of our voyage was dark and rainy. But though the rain continued after our landing, Japan was picturesque. On four out of our six days we drove about, shut up in water-tight buggies called "rickshaws." They were like one-hoss-shays, through whose front windows of isinglass we looked out upon the bare legs of our engineer and conductor, who took the place of the horse for twenty-five cents an hour.

There were other sights on these rainy days—endless processions of slipshod men on wooden clogs, clattering their way through the narrow streets, while they protected themselves from the watery downpour by flat oil-paper umbrellas; other strong-limbed men acting as wheel-horses to draw or push incredible weights of lumber; and saving themselves from the wet by bushy coats of straw that made them look like porcupines; women, little and big, carrying babies on their backs, occasionally a girl, aged anywhere from four to eight, loaded with a baby aged two; shops, shops, shops, one-storied, artistic, fantastic, with signs on which Ah Sing and Ah Tong have mingled Chinese characters and English, and which inform you that the proprietors can furnish you with the sake of Japan or the gasoline of the Standard Oil Company; these things convince you that you are in the midst of a crowded population struggling for subsistence and ready to work, a population of inexhaustible vitality and enterprise.

Our first rainy day was distinguished by a visit to the palatial mansion of a Japanese millionaire. Mr. Asano, the President of the Steamship Company that brought us thither, had invited the whole lot of first-class passengers to afternoon tea at his house in Tokyo. That house is a veritable museum of Japanese art. It reminded us of the collections of Mr. J. Pierpont Morgan. There was a great retinue of servants, and we were escorted upon arrival to one of the topmost rooms, where we were served with tea and presented with symbolic cakes by a dozen gorgeously bedecked young girls, who proved to be the children and grandchildren of our host. This, however, was only a preparatory welcome, for it was followed by the real reception in a great audience-room below, where Mr. and Mrs. Asano, together with their eldest son and daughter, gave us cordial greetings. A couple of hundred of our fellow passengers were gathered there and were partaking of light refreshments, with claret, tea, and mineral waters, while an expert Japanese juggler amused them with his feats of sleight of hand. The tapestries and paintings of this house were exquisite products of taste and skill, and the total effect was that of great wealth accompanied by true love for the beautiful. But it was the mansion of an orthodox Shinto and Buddhist, for in every large room there was an alcove with the sitting figure of a bronze Buddha.

A more distinctly Christian entertainment for that same rainy day was our reception by the Conference of Baptist missionaries and workers at the new Tabernacle in Tokyo....