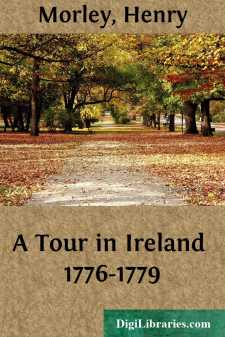 Arthur Young was born in 1741, the son of a clergyman, at Bradfield, in Suffolk.  He was apprenticed to a merchant at Lynn, but his activity of mind caused him to be busy over many questions of the day.  He wrote when he was seventeen a pamphlet on American politics, for which a publisher paid him with ten pounds’ worth of books.  He started a periodical, which ran to six numbers.  He wrote novels.  When he was twenty-eight years old his father died, and, being free to take his own course in life, he would have entered the army if his mother had not opposed.  He settled down, therefore, to farming, and applied to farming all his zealous energy for reform, and all the labours of his busy pen.  In 1768, a year before his father’s death, he had published “A Six Weeks’ Tour through the Southern Counties of England and Wales,” which found many readers.

Between 1768 and 1771 Arthur Young produced also “The Farmer’s Letters to the People of England, containing the Sentiments of a Practical Husbandman on the present State of Husbandry.”  In 1770 he published, in two thick quartos, “A Course of Experimental Agriculture, containing an exact Register of the Business transacted during Five Years on near 300 Acres of various Soils;” also in the same year appeared “Rural Economy; or, Essays on the Practical Part of Husbandry;” also in the same year “The Farmer’s Guide in Hiring and Stocking Farms,” in two volumes, with plans.  Also in the same year appeared his “Farmer’s Kalendar,” of which the 215th edition was published in 1862.  There had been a second edition of the “Six Weeks’ Tour in the South of England,” with enlargements, in 1769, and Arthur Young was encouraged to go on with increasing vigour to the publication of “The Farmer’s Tour through the East of England: being a Register of a Journey through various Counties, to inquire into the State of Agriculture, Manufactures, and Population.”  This extended to four volumes, and appeared in the years 1770 and 1771.  In 1771 also appeared, in four volumes, with plates, “A Six Months’ Tour through the North of England, containing an Account of the Present State of Agriculture, Manufactures, and Population in several Counties of this Kingdom.”

Thus Arthur Young took all his countrymen into counsel while he was learning his art, as a farmer who brought to his calling a vigorous spirit of inquiry with an activity in the diffusion of his thoughts that is a part of God’s gift to the men who have thoughts to diffuse; the instinct for utterance being almost invariably joined to the power of suggesting what may help the world.

Whether he was essentially author turned farmer, or farmer turned author, Arthur Young has the first place in English literature as a farmer-author.  Other practical men have written practical books of permanent value, which have places of honour in the literature of the farm; but Arthur Young’s writings have won friends for themselves among readers of every class, and belong more broadly to the literature of the country.

Between 1766 and 1775 he says that he made £3,000 by his agricultural writings.  The pen brought him more profit than the plough.  He took a hundred acres in Hertfordshire, and said of them, “I know not what epithet to give this soil; sterility falls short of the idea; a hungry vitriolic gravel—I occupied for nine years the jaws of a wolf.  A nabob’s fortune would sink in the attempt to raise good arable crops in such a country.  My experience and knowledge had increased from travelling and practice, but all was lost when exerted on such a spot.”  He tried at one time to balance his farm losses by reporting for the Morning Post, taking a seventeen-mile walk home to his farm every Saturday night.

In 1780 Arthur Young published this “Tour in Ireland, with General Observations on the Present State of that Kingdom in 1776-78.”  The general observations, which give to all his books a wide general interest, are, in this volume, of especial value to us now.  It is here reprinted as given by Pinkerton....