A Thin Ghost and Others 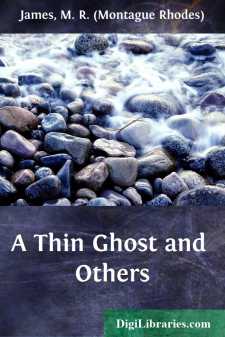 A Thin Ghost and Others THE RESIDENCE AT WHITMINSTER

Dr. Ashton—Thomas Ashton, Doctor of Divinity—sat in his study, habited in a dressing-gown, and with a silk cap on his shaven head—his wig being for the time taken off and placed on its block on a side table. He was a man of some fifty-five years, strongly made, of a sanguine complexion, an angry eye, and a long upper lip. Face and eye were lighted up at the moment when I picture him by the level ray of an afternoon sun that shone in upon him through a tall sash window, giving on the west. The room into which it shone was also tall, lined with book-cases, and, where the wall showed between them, panelled. On the table near the doctor's elbow was a green cloth, and upon it what he would have called a silver standish—a tray with inkstands—quill pens, a calf-bound book or two, some papers, a churchwarden pipe and brass tobacco-box, a flask cased in plaited straw, and a liqueur glass. The year was 1730, the month December, the hour somewhat past three in the afternoon.

I have described in these lines pretty much all that a superficial observer would have noted when he looked into the room. What met Dr. Ashton's eye when he looked out of it, sitting in his leather arm-chair? Little more than the tops of the shrubs and fruit-trees of his garden could be seen from that point, but the red brick wall of it was visible in almost all the length of its western side. In the middle of that was a gate—a double gate of rather elaborate iron scroll-work, which allowed something of a view beyond. Through it he could see that the ground sloped away almost at once to a bottom, along which a stream must run, and rose steeply from it on the other side, up to a field that was park-like in character, and thickly studded with oaks, now, of course, leafless. They did not stand so thick together but that some glimpse of sky and horizon could be seen between their stems. The sky was now golden and the horizon, a horizon of distant woods, it seemed, was purple.

But all that Dr. Ashton could find to say, after contemplating this prospect for many minutes, was: "Abominable!"

A listener would have been aware, immediately upon this, of the sound of footsteps coming somewhat hurriedly in the direction of the study: by the resonance he could have told that they were traversing a much larger room. Dr. Ashton turned round in his chair as the door opened, and looked expectant. The incomer was a lady—a stout lady in the dress of the time: though I have made some attempt at indicating the doctor's costume, I will not enterprise that of his wife—for it was Mrs. Ashton who now entered. She had an anxious, even a sorely distracted, look, and it was in a very disturbed voice that she almost whispered to Dr. Ashton, putting her head close to his, "He's in a very sad way, love, worse, I'm afraid." "Tt—tt, is he really?" and he leaned back and looked in her face. She nodded. Two solemn bells, high up, and not far away, rang out the half-hour at this moment....