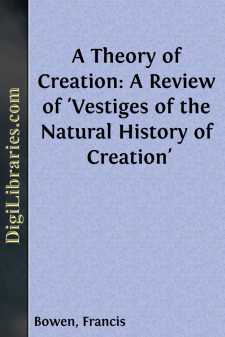 This is one of the most striking and ingenious scientific romances that we have ever read. The writer of it is a bold man; he has undertaken to give a hypothetical history of creation, beginning, as the title-pages say, at the earliest period, and coming down to the present day. It is not quite so authentic as that of Moses, nor is it written with such an air of simplicity and confidence as the narrative of the Jewish historian; but it is much longer, and goes into a far greater variety of interesting particulars. It contradicts the Jewish cosmogony in a few particulars, and is at variance with probability and the ordinary laws of human reasoning in many others. But the rather liberal rules of interpretation, which it is now the fashion to apply to the first chapter of Genesis, will relieve the reader from any scruples on the former account; and as to the latter, in these days of scientific quackery, it would be quite too harsh to make any great complaint about such peccadilloes. The writer has taken up almost every questionable fact and startling hypothesis, that have been promulgated by proficients or pretenders in science during the present century, except animal magnetism; and for this omission we have reason to be thankful. The nebular hypothesis, Laplace's or Compte's theory of planets shelled off from the sun, spontaneous generation,—some of these vagaries, we admit, are of much older date than the year 1800,—the Macleay system, dogs playing dominoes, negroes born of white parents, materialism, phrenology,—he adopts them all, and makes them play an important part in his own magnificent theory, to the exclusion, in a great degree, of the well-accredited facts and established doctrines of science.

We speak lightly of the author's plan, as one can hardly fail to do of a scheme so magnificent, and going apparently so far beyond the ordinary sources of information and the range of the human intellect. But the execution of the work is of so high an order, as fairly to challenge attention and respect. The writer, who has not chosen to give his name to the world, is evidently a man of great ingenuity and correct taste, a master of style, a plausible, though not a profound, reasoner, and having quite a general, but superficial, acquaintance with the sciences. His materials are arranged with admirable method, the illustrations are copious and interesting, the transitions are skilfully managed, and the several portions of the theory are so well fitted to each other, and form such a round and perfect whole, that it seems a pity to subject it to severe analysis and searching criticism. It is a very pleasant hypothesis, set forth in a most agreeable manner; and though it contains many objectionable features, these are cautiously veiled and kept in the background, and the reader is seduced into accepting most of the conclusions, before he is aware of their true character and tendency....