A Thane of Wessex 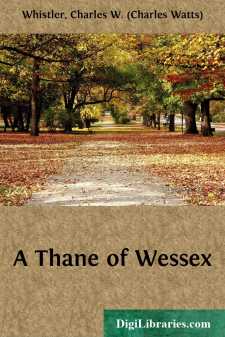 The whole of my story seems to me to begin on the day when I stood, closely guarded, before my judges, in the great circle of the people at the Folk Moot of the men of Somerset gathered on the ancient hill of Brent. All my life before that seems to have been as nothing, so quiet and uneventful it was compared to what came after. I had grown from boyhood to manhood in my father's great hall, on the little hill of Cannington that looks out over the mouth of the river Parret to the blue hills beyond. And there, when I was but two-and-twenty and long motherless, I succeeded him as thane, and tried to govern my people as well and wisely as he, that I too might die loved and honoured as he died. And that life lasted but three years.

Maybe, being young and headstrong, I spoke at times, when the feasting was over and the ale cup went round, too boldly of the things that were beyond me, and dared, in my want of experience, to criticize the ways of the king and his ordering of matters -- thinking at the same time no thought of disloyalty; for had anyone disparaged the king to myself my sword would have been out to chastise the speaker in a moment. But, as it ever is, what seems wrong in another may be passed over in oneself.

However that may be, it came to pass that Matelgar, the thane of Stert, a rich and envious man, saw his way through this conceit of mine to his own profit. For Egbert, the wise king, was but a few years dead, and it was likely enough that some of the houses of the old seven kings might dare to make headway against Ethelwulf his successor, and for a time the words of men were watched, lest an insurrection might be made unawares. I thought nothing of this, nor indeed dreamt that such a thing might be, nor did one ever warn me.

My father and this Matelgar were never close friends, the open nature of the one fitting ill with the close and grasping ways of the other. Yet, when Matelgar spoke me fair at the rere-feast of my father's funeral, and thereafter would often ride over and sup with me, I was proud to think, in my foolishness, that I had won the friendship that my father could not win, and so set myself even above him from whom I had learnt all I knew of wisdom.

And that conceit of mine was my downfall. For Matelgar, as I was soon to find out, encouraged my foolishness, and, moreover, brought in friends and bought men of his, who, by flattering me, soon made themselves my boon companions, treasuring up every word that might tell against me when things were ripe.

Then at last, one day as I feasted after hunting the red deer on the Quantocks, my steward came into my hall announcing messengers from the king. They followed close on his heels, and I, who had seen nothing of courts, wondered that so many armed men should be needed in a peaceful hall, and yet watched them as one watches a gay show, till some fifty men of the king's household lined my hall and fifty more blocked the doorway. My people watched too, and I saw a smile cross from one of Matelgar's men to another, but thought no guile....