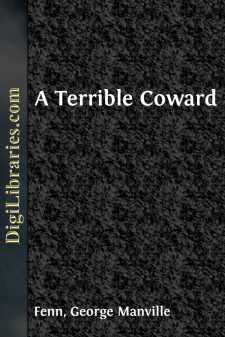 Plash! directly after; but the sounds those two words express, multiplied and squared if you like, till the effect upon the senses is, on the first hearing, one of dread mingled with awe at the mightiness of the power of the sea.

For this is not “how the waters come down at Lodore,” but how they come in at Carn Du, a little fishing town on the Cornish coast.

There’s a black mass of rock standing out like a buttress just to the west of the little harbour, running right into the sea, and going down straight like a wall into the deep clear water at its foot, as if to say to the waves, “Thus far may you come, and no farther.” For hundreds upon hundreds of years the winds and tides have combined to rid themselves of this obstacle to their progress, the winds urging the waves that come rolling in from the vast Atlantic, gathering force as they increase in speed, like one rushing at a leap; and at last leap they do, upon the great black mass of shale, tons upon tons in weight, seeming as if they would sweep it clear away, and rush on in mad ruin to tumble the fishing luggers together and shatter them like eggs as they lie softly rubbing together in the harbour.

But no; it is only another of the countless millions of failures on the part of those Atlantic billows. They leap and fall with a mighty boom upon that rock, but only to break up with a hissing plash into a mass of foam, defeated, churned up with froth that runs hissing back, ready to give way to another wave advancing to the charge.

They have worn the rock smooth, so that it glistens like glass in the morning sun, for, as if aware of the folly of urging on its regiments of well-mounted cavalry to come dashing in upon the wild white-maned sea-horses, or the more sober lines of heavy infantry in uniforms of green and blue, the sea has for countless ages bombarded Carn Du with stone-shot in the shape of great boulders. These have ground and polished off every scrap of seaweed, every barnacle, limpet, and sea-anemone, leaving the rock all smooth and bare, while the boulders lie piled to the east in a heap, where the waves that try to take the rock in flank leap amongst them, and roll them over higher and higher, to come rumbling down as if they were tiny pebbles instead of rounded masses of granite and spar-veined stone a quarter, half, and a hundredweight each.

It was an awful place in a storm—Carn Du. It was there that the great Austrian full-rigged ship came on, during one black and raging night; when one minute from the harbour, and off the cliff, the fishermen in their oilskins could see the lights of a vessel—the next minute, nothing.

There were the remains of a few timbers, though, in the morning—torn, twisted, gnawed, as it were, into fibres and splintering rags. That was all.

It was an awful place in a storm, where the spray, broken up into feathery froth by the battle on the rocks, came flying over the town, and then away landward, like a fine misty rain; but it was a grand place in a calm....