A Tale of the Summer Holidays 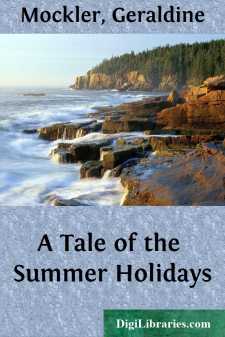 CHAPTER I. THE SECRET MEETING.

wo days after the holidays began, the four younger members of the Danvers family received a note summoning them to a secret meeting at half-past seven the next morning in the summer-house. Drusie, who had written and delivered the notes, including one to herself, was the first to reach the appointed place; and when, a few minutes later, the other three arrived, they found her seated at the rustic table with a sheet of paper and a pencil before her, and a glass of water at her elbow.

"Good-morning," she said, rising and shaking hands with them all round. "Helen, will you sit facing me, and Jim and Tommy at either side?"

In a solemn silence they obeyed; and then seating herself again, she took a sip of water. Not that she was thirsty, but she was rather nervous.

It was so long since the last meeting, and hitherto Hal had always been the chairman. She stifled a sigh; it seemed so strange to hold a secret meeting without him.

"Go ahead," said Jim, encouragingly; "or would you like me to be chairman, Drusie?"

"Certainly not," she replied hastily. "I am the eldest here, and of course I must be chairman. And you must be serious, Jim, for we have got a lot to talk about this morning, and it won't do for Hal to come out and find us here."

"He is asleep and snoring," said Helen, in a tone of great contempt. "He has learned a lot of silly things at school, and one of them is never to get up until he is called."

"Order, please," said Drusie, rapping on the table. "You must not begin to discuss the subject until I have announced it." She rose, gulped down a few mouthfuls of water, and said: "Ladies and gentlemen, we are met here this morning to discuss a question of paramount importance." She paused, partly for breath and partly to take note of the effect of her words. She was proud of that beginning, which she had learned from the report of a missionary meeting. She was pleased to observe that Helen and Tommy looked decidedly impressed, but Jim was grinning. Frowning at him, she resumed: "I may say that the matter affects us all very seriously, and it is one that ought to be taken up by the nation at large. But I regret to say that the people of England are only too apt to shirk their very obvious, their very obvious—"

But at that point she stuck hopelessly fast. Though she had carefully avoided glancing at Jim, she had seen his face out of the corner of one eye, and the wide, fixed grin that ornamented it had put her out dreadfully.

"Oh, come," he said, striking in; "aren't you laying it on rather thick? Even though Hal has come back from school with so much side on that he does not know what to do with himself, I don't see that the nation at large is concerned."

"No, of course not," Drusie acknowledged; "but it said that in the paper, you know, and it seemed a nice beginning."

"Well, suppose we skip that part," said Jim, "and get to the real business, which is of course about Hal."

"Very well," said Drusie, though she rather regretted her long sentences....