A Syllabus of Kentucky Folk-Songs 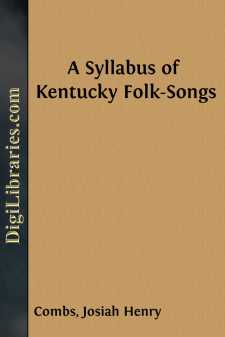 This syllabus, or finding-list, is offered to lovers of folk-literature in the hope that it may not be without interest and value to them for purposes of comparison and identification. It includes 333 items, exclusive of 114 variants, and embraces all popular songs that have so far come to hand as having been "learned by ear instead of by eye," as existing through oral transmission—song-ballads, love-songs, number-songs, dance-songs, play-songs, child-songs, counting-out rimes, lullabies, jigs, nonsense rimes, ditties, etc.

There is every reason to believe that many more such await the collector; in fact, their number is constantly being increased even today by the creation of new ones, by adaptation of the old, and even by the and consequent metamorphosis, of literary, quasi-literary, or pseudo-literary types into the current of oral tradition.

This collection, then, is by no means complete: means have not been available for a systematic and scientific search for these folk-songs, which have been gathered very casually during the past five years through occasional travel, acquaintanceship, and correspondence in only the twenty-one following counties: Fayette, Madison, Rowan, Elliott, Carter, Boyd, Lawrence, Morgan, Johnson, Pike, Knott, Breathitt, Clay, Laurel, Rockcastle, Garrard, Boyle, Anderson, Shelby, Henry, and Owen—all lying in Central and Eastern Kentucky.

All of the material listed has thus been collected in this State, though a variant of The Jew's Daughter, page , has come by chance from Michigan, and another of The Pretty Mohee, page , was sent from Georgia. The Cumberland Mountain region, in the eastern part of the State, has naturally furnished the larger half of the material, because of local conditions favorable to the propagation of folk-song. However, sections of Kentucky lying farther to the westward are almost equally prolific. The wide extension of the same ballad throughout the State argues convincingly for the unity of the Kentucky stock—a fact which may be confirmed in more ways than one.

The arrangement is as follows: The material in hand is loosely grouped in eighteen sections, according to origin, chronology, content, or form. Though logically at fault, because of the cross-division thus inevitably entailed, this plan has seemed to be the best. No real confusion will result to the user in consequence. In fact, no matter what system be adopted, certain songs will belong equally well to two or more different categories.

Under each of these eighteen main divisions the treatment of the individual song-ballad is in general as follows: First, stands the title, with variant titles in parentheses. Should this be unknown, a caption coined by the editors is placed in brackets. Secondly, a Roman numeral immediately follows the above to denote the number of versions, if variants have been found. Thirdly, the prosodical character of the song is roughly indicated by a combination of letters and numerals. Each letter indicates a line; the variation in the letters indicates, in the usual fashion, the rime-scheme of the stanza. Each numeral indicates the number of stresses in the line (or lines) denoted by the letter (or letters) immediately succeeding it. When a chorus, burden, or refrain is present, the metrical scheme of this stands immediately after an "and," as, for example, in The Blue and the Gray, page . In the case of the refrain, the letters used are independent of those immediately preceding the "and," and denoting the rime-scheme of the stanza proper. Fourthly, an Arabic numeral follows to indicate the number of stanzas in the song, exclusive of the refrain, should one be present. If the number of stanzas in a ballad is indeterminable, because its form is fragmentary, or because its variant versions differ in length, this fact is indicated by an appended ca (circa)....