A Survey of Russian Literature, with Selections 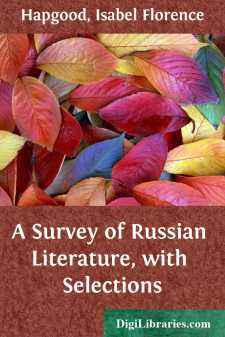 THE ANCIENT PERIOD, FROM THE EARLIEST TIMES TO THE INTRODUCTION OF CHRISTIANITY IN 988.

Whether Russia had any literature, or even a distinctive alphabet, previous to the end of the tenth century, is not known.

In the year 988, VladÃ­mir, Grand Prince of KÃ­eff, accepted Christianity for himself and his nation, from Byzantium, and baptized Russia wholesale. Hence his characteristic title in history, "Prince-Saint-equal-to-the-Apostles." His grandmother, Olga, had already been converted to the Greek Church late in life, and had established churches and priests in KÃ­eff, it is said. Prince VladÃ­mir could have been baptized at home, but he preferred to make the Greek form of Christianity his state religion in a more decided manner; to adopt the gospel of peace to an accompaniment of martial deeds. Accordingly he compelled the Emperors of Byzantium, by force, to send the Patriarch of Constantinople to baptize him, and their sister to become his wife. He then ordered his subjects to present themselves forthwith for baptism. Finding that their idols did not punish VladÃ­mir for destroying them, and that even great Perún the Thunderer did not resent being flung into the Dniépr, the people quietly and promptly obeyed. As their old religion had no temples for them to cling to, and nothing approaching a priestly class (except the volkhvýe, or wizards) to encourage them in opposition, the nation became Christian in a day, to all appearances. We shall see, however, that in many cases, as in other lands converted from heathendom, the old gods were merely baptized with new names, in company with their worshipers.

Together with the religion which he imported from Byzantium, "Prince-Saint" VladÃ­mir naturally imported, also, priests, architects, artists for the holy pictures (ikóni), as well as the traditional style of painting them, ecclesiastical vestments and vessels, and—most precious of all—the Slavonic translation of the holy Scriptures and of the Church Service books. These books, however, were not written in Greek, but in the tongue of a cognate Slavonic race, which was comprehensible to the Russians. Thus were the first firm foundations of Christianity, education, and literature simultaneously laid in the cradle of the present vast Russian empire, appropriately called "Little Russia," of which KÃ­eff was the capital; although even then they were not confined to that section of the country, but were promptly extended, by identical methods, to old Nóvgorod—"Lord Nóvgorod the Great," the cradle of the dynasty of Rúrik, founder of the line of sovereign Russian princes.

Whence came these Slavonic translations of the Scriptures, the Church Services, and other books, and the preachers in the vernacular for the infant Russian nation? The books had been translated about one hundred and twenty-five years previously, for the benefit of a small Slavonic tribe, the Moravians. This tribe had been baptized by German ecclesiastics, whose books and speech, in the Latin tongue, were wholly incomprehensible to their converts. For fifty years Latin had been used, and naturally Christianity had made but little progress....