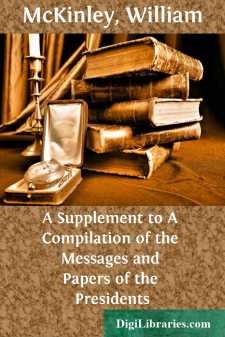 At the National Republican Convention which met at Philadelphia in June, 1901, William McKinley was again nominated the Republican candidate for the Presidency of the United States. At the November election he was re-elected, receiving 292 electoral votes, against 155 votes for William J. Bryan.

In September, 1901, he accepted an invitation to be present at the Pan-American Exposition at Buffalo. On September 5 he delivered his last public utterance to the people, in the Temple of Music, to a vast audience. The next day, returning from a short trip to Niagara Falls, he yielded to the wishes of the people and held a reception in the Temple. Among those who, passing in single file, took him by the hand, was one who approached with his hand wrapped and held to his breast as though injured. Concealed within the covering was a loaded revolver; and as he gave his other hand to the President, a token of friendship, he quickly fired two shots, from the effects of which the President sank into the arms of those near him. He was taken to the residence of Mr. John G. Milburn, President of the Exposition Company, where on September 14, 1901, after an unexpected relapse, he died. The body was taken to Washington, D.C., and the state funeral was held in the rotunda of the Capitol. Thence the body was taken to his home in Canton, Ohio, for interment.

The period covered by the administration of William McKinley was, undoubtedly, more crowded with events calculated to try and to touch the very heart of the nation than was any period since the Civil War. The United States has passed through crisis after crisis in quick succession and has emerged not only in safety but with untarnished honor, increased glory, and the great consciousness of solidarity and unification. This is attested by the wise management of affairs in connection with the Nicaragua Canal; the increase of the navy, the formation of an army and the imposition of taxes which in no way impeded the march of industry; the settlement of railway claims; and the successful starting in life of Cuba and the administration of far colonial affairs. Aside from the wise counsels of the Executive of the nation, the calmness and cool action of the people, amid distracting and perplexing events, have contributed to the honor of the nation in no slight degree. All of this, and more, was abundantly testified to, at the time of the deplorable circumstances attending William McKinley's death by the unexampled outburst throughout the world of sympathy with the bereaved nation and of admiration for the man.

In obedience to the will of the people, and in their presence, by the authority vested in me by this oath, I assume the arduous and responsible duties of President of the United States, relying upon the support of my countrymen and invoking the guidance of Almighty God. Our faith teaches that there is no safer reliance than upon the God of our fathers, who has so singularly favored the American people in every national trial, and who will not forsake us so long as we obey His commandments and walk humbly in His footsteps....